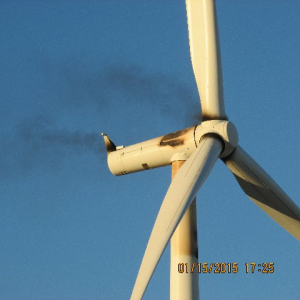 January 17, 2015 (Ocotillo) –A wind turbine at the Ocotillo Wind Energy Facility burst into flames on January 15th.  East County Magazine photographer Jim Pelley, an Ocotillo resident, caught the incident on video: https://www.youtube.com/watch?v=iGYvHM5KlJs&feature=youtu.be. The Siemens 2.3-108 turbine was a 2.3 megawatt  model with 108 meter blades.  The turbine (#110) is located along a mining road.

“There were no injuries,” Jeff Grappone from Siemens told ECM.  An investigation is underway to determine the cause of the fire, he stated in an e-mail.  The equipment impacted (six turbines on one circuit) has been de-energized, a safe perimeter established and the tower is being monitored continuously, he indicated.