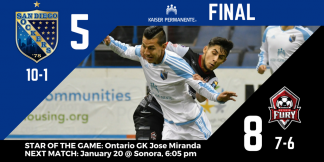 For the first time this season, the Sockers trailed a game at the end of a quarter after Ontario’s Adrien Perez tallied twice to give the Fury a 2-1 lead at the end of the first period.

Israel Sesay scored at 3:43 of the second to put San Diego behind by two goals for the first time this year. Hiram Ruiz took advantage of a Fury mistake to score the team’s second short-handed goal of the season at 4:53 off a helper from Felipe Gonzalez. Erick Tovar took a Brandon Escoto pass and put it into the back of the net to even the score at the 8:51 mark. However, Ontario struck back two minutes later to regain the lead at 4-3 and take it into the halftime break. It was the first time San Diego has trailed at the half.

Kraig Chiles scored the only goal of the third period on an assist from Max Touloute at 13;29. He would later add his second marker late in the fourth with the sixth attacker on. The Sockers leading scorer has a goal in the 10 games he has played.

The Sockers had done to them by the Fury, which they usually do against their opponents, by outscoring San Diego 4-1 in the final stanza to seal the victory.

Chris Toth, who was making his second straight start, suffered his first loss by allowing a season-high seven goals. To his defense, the Sockers backline was not providing him much support. San Diego did kill off three of four Fury power play goals.

San Diego travels to Sonora, Mexico for a match on Saturday, January 20, 6:05 p.m., before returning to Valley View Casino Center on Sunday, January 21, 5:05 p.m. for the rematch with the Ontario.