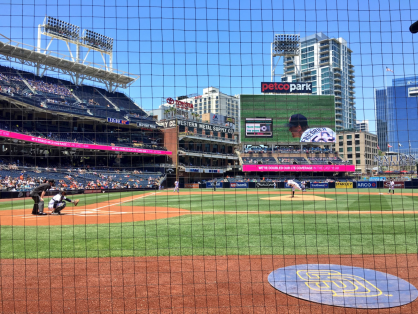 June 29, 2016 (San Diego) - After a colossal beating by the blackbirds last night, the Padres looked to rebound this afternoon.  Yovani Gallardo started on the hill for Baltimore against Christian Friedrich for San Diego.

Things stayed quiet until the fourth inning and then the Orioles did what first place teams usually do; tee off on struggling teams.  Jonathan Schoop doubled, scoring San Diego native and Morse High graduate Adam Jones and the Orioles took a 1-0 lead.  The blackbirds went up by two on Manny Machado’s single that scored Schoop.  The inning was capped off by Mark Trumbo’s two-run blast to left and the Orioles led by a whopping 4-0.

In the fifth, the Padres committed two errors that drove in two Orioles runners, making the score 6-0.

In the sixth, Jones singled and scored Francisco Pena and the Orioles led by a touchdown, 7-0.

The Padres got some reprieve in their half of the sixth with Brett Wallace’s three-run homer to cut the Orioles’ lead to 7-3.

The Padres rallied a bit in their half of the ninth with Alexei Ramirez’s double that scored Derek Norris and made the score 12-4 Orioles.  Wil Myers doubled, scoring two and the Padres cut the deficit to six at 12-6, but the rally would end there.  Both teams suffered a colossal bullpen meltdown, but the Orioles came out on top 12-6 and swept the Padres.

The Pads get an off-day tomorrow before a weekend series against the New York Yankees for the first time this season starting Friday at 7:40 p.m.

The Baltimore Oriole, like other orioles, does have some black feathers on head wings and back, but the predominate color they are noted for is bright yellow for the male (less so for the female).

They're commonly referred to as the blackbirds.  So.  Sorry.

..you are correct, Liz. Although I'm shocked that a Baltimore Oriole is a blackbird it seems to be a fact. So I've learned something in the "you won't believe this but...." category.(to me)