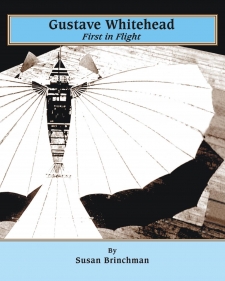 July 23, 2015 (San Diego’s East County) - I was absolutely astounded and flabbergasted after reading Susan Brinchman’s Gustave Whitehead: First in Flight, for all my life and throughout elementary school and into college I had been taught that the Wright brothers, Orville and Wilbur, were the pioneers of modern aviation. In this fascinating and well documented and researched book, Brinchman states: “Paul Jackson, Editor-in-Chief of the century-old Jane’s All the World Aircraft (2013), often referred to as ‘the bible of aviation history’, announced in its Centennial Issue, in March, 2013, that Whitehead was ‘first to fly’, ahead of the Wrights, and was the inventor of the airplane, based on the mountainous evidence accumulated over the previous eight decades.”