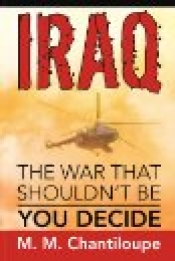 May 16, 2015 (San Diego’s East County) - Although the Iraq war is over, we are still feeling the residual effects of that controversial campaign, and it is put into perspective by San Diego resident M.M. Chantiloupe in her book; Iraq: The War That Shouldn’t Be – You Decide. Chantiloupe writes a scathing analysis and rebuke of the Bush Administration in this well-written and incisive book. She asks rhetorical questions that gets us all to think about why we actually went into that war and the harm that it has done to America and Iraq, as well as the world itself. Central in her discussion is the false pretenses of weapons of mass destruction. Chantiloupe writes in a scholarly fashion her analysis of this war and its residual effects, such as the current threat of ISIS, or the Islamic terrorist threat.