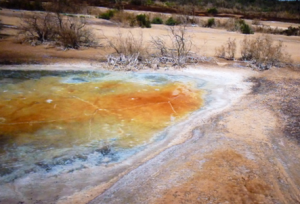 “This is moving people from their lands,” Carlos Pelayo, an organizer with the Asociación de Jornaleros y Trabajadores de Casa, said during a discussion sponsored by Activist San Diego April 15 titled "Energy Projects, Fracking and the Rights of Mother Earth." Pelayo spoke on the plight of indigenous people, respect for sacred sites, and the growing international movement for rights of Mother Earth and the people that Earth sustains.

He painted a bleak picture of massive environmental degradations escalating around the world, driven by  multi-national energy companies seeking profit at the expense of native people’s way of life.

“We have a global water crisis.  We don’t even have enough for us to drink,” Pelayo observed.  Yet precious water supplies 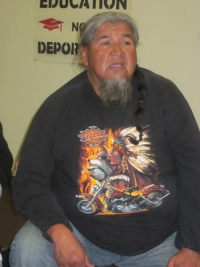 are being contaminated by energy companies.  Fracking, for example, injects millions of gallons of water contaminated with chemicals into the earth, polluting groundwater.    To cite another example, “Peabody Coal on a reservation ran on a slurry with water just to move the coal.”  Water supplies were reduced in the Four Corners region, where “there is no water.”

As a result of such degradation, he says, “they are moving people from their land.”

One of the most heartbreaking scenarios has occurred along the Colorado River in the southwestern  United States and northern Mexico.

“Hundreds of thousands of people who live on the river are dramatically impacted by mining and drilling. Now they don’t have a traditional way of living.  They are off the reservation, they are kind of lost,” Pelayo said.  “For tribes on the river, the Colarado River is Mother Earth’s spine. Her backbone is so degraded-- we’re nourishing ourselves on that.”

Places where the once powerful Colorado River flowed have been reduced to muddy, toxic sludge. Wetlands once rich with birds and fish are now barren, parched desert.  There is no water for drinking, farming or fishing.   He showed a film that graphically depicted the destruction as the filmmakers paddled downstream, ultimately forced to bushwhack through a swamp of agricultural runoff in water so toxic that it burned their skin—before it dried out completely.

Pelayo said he took some Native Americans from an impacted area on a trip through the Grand Canyon, where the river still flows, and told of their tears over the loss of their way of life.

“Where will all that fracking water go?” Pelayo asks. “Into the ocean?”

In Canada, where the Keystone Pipeline threatened to destroy navigable waters crucial to Canada’s First Nations indigenous people, the Idle No More movement was born and soon swept beyond Canada to foster rallies in other countries.  Canada’s First Nations tribes attained a victory, reaching a pact with the Canadian government ot keep the pipeline set to carry polluting tar sands off of tribal lands.

A source of anguish to many Native Americans has been the way in which big energy companies have divided communities, at times pitting tribal members against each other.   This occurs when some impoverished tribes lease their lands or forge other partnerships with the energy corporations,  at the expense of neighboring tribes or even their own tribal members’ health.

“There is an impression that all Indians care about the environment,” Pelayo said, but added that as people are forced off their lands or made to assimilate into mainstream schools,  their views can change.  “If you disconnect people from their land, they won’t defend the land,” he says. “All they care about is if the tap comes on, the toilet flushes, and there’s gas to put in the tank.” Forgotten is where that energy or water comes from—and the people who live or worship there. 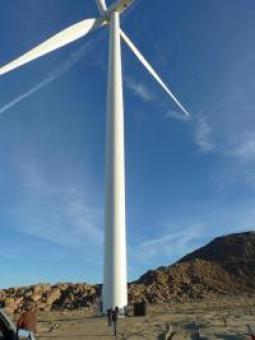 As an example he cites wind projects in San Diego’s East County and Imperial Valley, projects that have been strongly opposed by some tribes who still use the cites for ceremonial purposes, while other tribes backed wind energy development that destroyed the graves of ancestors.

He reserved harshest criticism for the U.S. Bureau of Land Management, which has opened up millions of acres of public land to energy development, mining, and other industrial uses.  “The BLM doesn’t manage land.  It just maintains it for future destruction,” he said.

Last week, shortly after Pelayo’s talk, the California Native American Heritage Commission proved his point – ruling that the BLM failed in its duty to protect sacred sites on the Ocotillo Express Wind Facility site.  The Commission has urged the Attorney General of California to pursue legal action against the BLM, which ignored pleas of tribes and a well-documented history of sacred sites on the property, including thousands of artrifacts, burial sites, mountains believed to be creation sites by several tribes, and an ancient spoke wheel geoglyph previously listed on the National Register of Historic Places.

Similar stories are taking place around the world.  Rainforests are being hacked down for mining of minerals “so we can have our cellphones,” Pelayo notes.  Tribal people are being left homeless and destitute from Africa to the Amazon as the quest for modern amenities increases.

Pelayo observes that such desecration would never be allowed in places non-natives hold sacred.  “What if I wanted to build a pipeline through the Vatican?” he asked.

How has this been allowed to occur?

One problem is that the majority of the public has been kept in the dark – due to media failing to tell these stories.   “There is a critical mass of people who have no idea what’s going on, not just in urban areas but to indigenous people,” Pelayo says.

Native American culture compels tribal leaders to weigh not only what is good for today, but to keep in mind the wellbeing of descendants seven generations in the future. That’s a far cry from what is happening now to native peoples, as well as the earth and waters that have long sustained them.

On May 15, Pelayo will be traveling to Washington D.C. to meet with the Obama administration.

“We need a serious attitude change,” Pelayo concluded.  “This is about short-term profit, but they are never thinking about the long term.”

Some organizations are arising and taking action. Speaking at the Water Conservation Garden in El Cajon last year, filmmaker James Redford (son of film star Robert Redford) spoke at a showing of the film “Watershed” which depicts the destruction of the Colorado River – but also successful efforts now being made to restore some wetland areas along the river.  Learn how you can help at the website Save the Colorado http://www.savethecolorado.org/donate.php  and http://www.savethecolorado.org/threats.php .

The greater change, however, must ultimately be at a higher level—enacting national  regulations and adopting global policies to prevent the pollution of lands and taking of waters that are displacing native peoples.