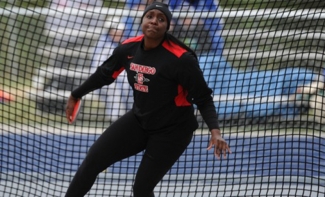 June 22, 2017 (Sacramento) - San Diego State track and field alum Whitney Ashley captured silver in the discus and junior Ashley Henderson advanced to the 100 meters semifinal in the opening day of the USA Outdoor Track and Field Championships on Thursday.

As one of the top-three finishers in the event, and by reaching the IAAF qualifying standard of 61.20 meters, Ashley’s second-place showing secures her a spot on Team USA at the 2017 IAAF World Championships, held Aug. 4-13 in London.

The 2017 World Championships marks the fourth time the 2012 NCAA discus champion and four-time All-American will represent the United States at the international level. She competed for Team USA at the World Championships in 2013 and 2015, and, after winning the 2016 U.S. Olympic Trials, represented the United States at the 2016 Rio Olympics. Ashley has finished second-or-better in each of her last three national championships (second in 2015 and 2017, first in 2016).

The reigning U.S. champion in the event, Ashley’s quest to repeat was delayed after the start of the discus throw was pushed back over an hour due to temperatures rising above 100 degrees Fahrenheit. Once the event got underway, she threw 200 feet, 6 inches (61.13m) on her third attempt and topped that with a 204-foot, 1-inch toss (62.20m) on her fifth attempt.

However, she couldn’t get past the American record holder in the event, Illinois alum Gia Lewis-Smallwood, who threw for 205 feet, 6 inches (62.65m) on her fifth attempt to win the event. Lewis-Smallwood and Ashley also finished 1-2 at the 2015 USA Track and Field Outdoor Championships.

In her first senior national championship, Henderson advanced to the 100 meters semifinals, set for Friday at 5:16 p.m. She earned an automatic qualifying spot after placing third in the second heat with an 11.16 time. Henderson placed 15th overall in the event. She is slated to run the semifinals in lane seven of the second heat. The 100-meter dash final is on tap for Friday at 7:52 p.m.