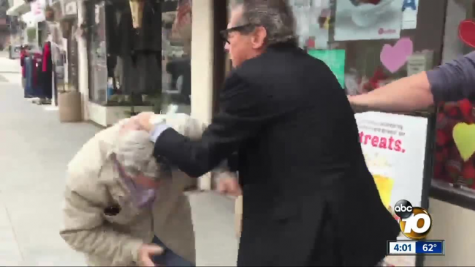 The incident occurred in January 2020 after reporters from multiple news outlets sought to interview Carzis regarding a video on social media that appeared to show him fondling a woman in front of his storefront Others had alleged he made crude comments and committed lewd acts, including a woman who posted a photo of Carzis clutching his crotch.

Carzis, enraged, was shown on news videos cursing at reporters, shoving a reporter and destroying a videographer’s camera.  Whether or not Carzis will be required to pay reparations remains to be determined by the court.
An NBC 7 investigation found that police had been called at least 22 times regarding Carzis from 2015 until his arrest.
In addition to the felony vandalism charge, LMPD had forwarded two reports to the District Attorney for lewd acts in public and a misdemeanor battery for spitting on an individual, but those matters were not pursued after the guilty plea for destroying the video camera.
Peter’s Men’s Apparel has been closed since Carzis’ arrest.