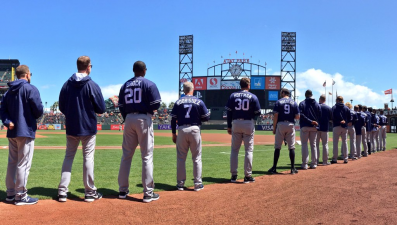 Photo:  Padres line up for the anthem.  Courtesy @Padres on Twitter

April 27, 2016 (San Francisco) - The song says that if you go to San Francisco, remember to wear a flower in your hair.  The Padres replaced their flowers with black wreaths.

Andrew Cashner started for San Diego against the Giants’ Jeff Samardzija.  The Giants started the Padre-killing in the first with Brandon Belt’s sacrifice fly to drive home Denard Span for a 1-0 lead.  Brandon Crawford hit another sac fly to score Joe Panik and make the score 2-0 Giants.  All of it was capped off by Hunter Pence’s triple that scored Matt Duffy and made the score 3-0.
The Padres came back a little bit in the third when Jemile Weeks tripled and scored Alexei Ramirez, making the score 3-1.  Andrew Cashner grounded out to score Weeks and suddenly, the Giants’ lead was one at 3-2.  Then up to the plate stepped Matt Kemp.  He blasted a two-run homer and the Padres took a one run lead, 4-3.
The Giant-killing didn’t last long.  Belt hit a double in the Giants’ half of the third and scored Duffy to tie the game at four.  Jeff Samardzija singled and scored two and the Giants reclaimed the lead, 6-4.
The pain continued in the fourth as Michael Kirkman took the mound and gave up a triple to Belt to drive in two runs and give the Giants a 8-4 lead.  Pence singled and scored Belt and the Giants led 9-4.  Trevor Brown singled and scored Pence and the Giants went to double digits.  10-4.

Brett Wallace got a run back for the Padres in the sixth on his double that drove in Wil Myers and cut the Giants’ lead to seven at 12-5.

Gregor Blanco singled in the Giants’ half of the sixth and San Fran went up 13-5.

In the seventh, Myers hit a much-needed three run homer to cut the Giants’ lead to five, 13-8.

The Padres tried to start a rally in the ninth with Adam Rosales’ solo homer that cut the Giants’ lead to 13-9, but that rally would be nonexistent.  The Padres lose 13-9 and are swept by the Giants.

The Padres get a day off tomorrow before heading to LA to face the Dodgers on Friday.