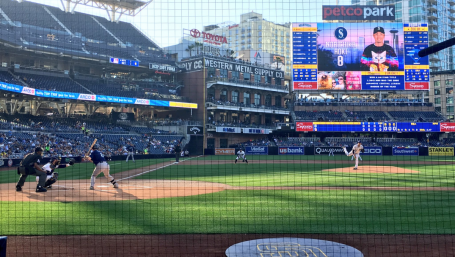 June 2, 2016 (San Diego) - The Mariners and Padres played the last game of their split home-at-home series tonight.  Wade Miley took the mound for Seattle against Colin Rea for San Diego.  What started as a normal ballgame devolved into utter chaos.

The Mariners struck in the first again and this time, it was Kyle Seager who hit a single to drive in Robinson Cano and make the score 1-0 Seattle.
Just like last night, though, the Padres tied the game at one on Matt Kemp’s single in their half of the first. Yangervis Solarte scored on Derek Norris’ single and the Padres took the lead 2-1.  Adam Rosales looped a single to shallow right center to score two and the Padres went up 4-1.

The Mariners got a run back in the fourth with Nelson Cruz’s solo homer and the Padres’ lead was cut to two at 4-2.

But the Padres regained a three-run lead in their half of the fourth on Jon Jay’s looper to center that drove in Rosales for a 5-2 lead.

In the seventh with the bases full of Mariners, Seager singled and drove in two runs and the Padres led by three, 12-9.  Lee singled off of reliever Brandon Maurer and drove in Cano and suddenly, the Padres’ 10-run lead was cut to two, 12-10.  Chris Ianetta singled and scored Seager and suddenly, it was a one-run ballgame, 12-11.  As predicted, the Mariners tied the game on Stefen Romero’s single that drove in Lee and just like that, it was 12-12.  I wonder if anyone saw this coming.  Then the Mariners took the lead on Shawn O’Malley’s single to score Ianetta and it was 13-12 Seattle.   The Mariners made it 14-12 after Romero scored on Norichika Aoki’s single.  Franklin Gutierrez added two more.  16-12 Mariners.

In the Padres’ half of the seventh, Ramirez singled on a generous hop and drove in Matt Kemp and the score was narrowed to 16-13 Mariners.  But there would be no reverse comeback this time for the Padres.

Seattle scored nine runs in the seventh inning to win the game, making them the first team to complete a 10-run comeback since the Oakland Athletics in 2009.  This the biggest blown lead that the Padres have suffered in franchise history; their last big blown lead was in 1987 when they blew a nine-run lead against the Atlanta Braves.

The Colorado Rockies are coming to town tomorrow night.  The first pitch is at 7:40.  Drew Pomeranz will get the start against Chris Rusin for Colorado.