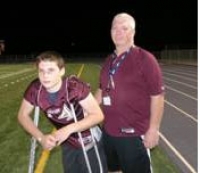 November 5, 2009 (Alpine)-Meet 13-year-old Vincent "Vinnie" Higgins of Alpine, who just discovered he is facing a life changing illness. Vinnie has bone cancer, and he and his family can use some help.

The Joan MacQueen Middle School eighth-grader has been an Alpine American Little League player. This year he was playing for the Alpine Pop Warner Mountaineers.

Several weeks ago Vinnie was hurt during football. He was sent to Children's Hospital in San Diego, where the cancer was discovered in his femur. Fortunately, there was no trace of the disease in his lungs at that time.Now Vinnie faces a 20-week schedule of chemotherapy treatment. It's also possible at least part of his thigh bone will be removed.

Vinnie's family has insurance, but not nearly enough.

PLAY (Park Land for Alpine Youth) is overseeing a large fund raising effort for the family. All donations and goods are tax deductible, because PLAY is a nonprofit 501 (c) 3 corporation. The first major fund raiser is an auction and dinner from 6-9 p.m. on Nov. 9. It will be at the Alpine Community Center, which is donating the space and the dinner.

PLAY is accepting donations of money as well as auction gifts for the event. Auction items so far include great two-night stays at San Diego waterfront resorts, dinners at upscale area restaurants, a Southwest Airlines ticket to any place they fly, golf packages, NASCAR rides and a trip for two by private plane for breakfast at Casa Del Zorro.

Special guests from the Padres and Chargers will make appearances at the fund raiser.
Alpine residents Mark Bailey, Channel 6 television news anchor, and Mark Grant, Channel 4 Padres broadcaster and former Padres pitcher, also will be there.

Later in December there will be an adults' only fund raiser at the Viejas DreamCatcher Lounge. The date and details for this gala evening will be released soon.

To donate funds or auction items, please contact any officer of PLAY or Chuck Taylor at 619-251-6998, or on the website at www.playalpine.org