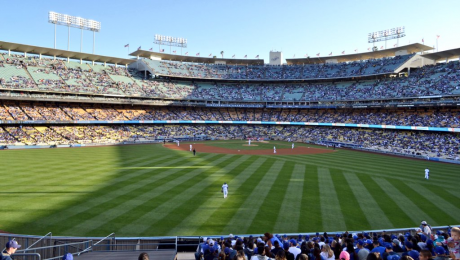 April 30, 2016 (Los Angeles) - The Padres had great success last night in their revenge against the Dodgers.  They looked to continue their revenge tour tonight.  Colin Rea got the start for San Diego against Ross Stripling for Los Angeles.

The Padres were determined to make it two in a row.  Jon Jay doubled in the third and Wil Myers did the same to bring him home for a 1-0 Padres lead.  Matt Kemp doubled and drove home Myers for a 2-0 lead.
But Chase Utley, scourge of the league thanks to last year’s playoffs, hit a two-run homer in the LA half of the third and tied the game at two.
Melvin Upton Jr. reclaimed the lead with a double in the fifth that scored two and gave the Padres their lead back, 4-2.  Alexei Ramirez singled and drove home MUJ for a 5-2 San Diego lead.
5-2 Padres would be the final score.  Another lopsided pitching matchup tomorrow for the matinee series finale:  Drew Pomeranz vs. Clayton Kershaw.  Kersh will throw the first pitch at 1:10 p.m.