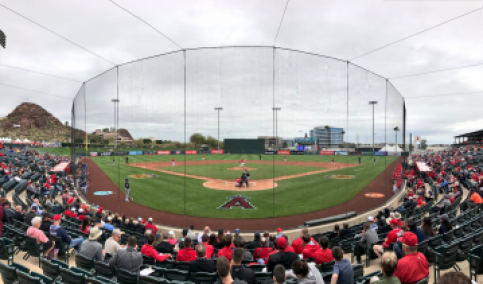 February 27, 2017 (Tempe, Ariz.) - Thanks to Fox Sports San Diego and our sports editor being sick, ECM got their first look at the 2017 Padres today when they faced the Los Angeles Angels in a spring training exhibition.  J.C. Ramirez started on the hill for the Angels against the new Friar from the Atlanta Braves, Tyrell Jenkins.

The Padres have been having a miserable spring, but today, they finally broke through.  In the second, catcher Austin Hedges singled up the middle to bring home Hunter Renfroe and the Friars went up 1-0.

It went away in the Angels’ half of the third when Kole Calhoun lined to right to score Andrelton Simmons from second and the game was tied at one.

The Angels continued in their half of the fourth with a single by Danny Espinoza to score C.J. Crohn and the Angels went up 2-1.  Though Espinoza was caught in a rundown for the final out, left fielder Cameron Maybin scored and the Angels ended the fourth up 3-1.

The Padres threatened back in the fifth when Wil Myers singled to bring home Christian Bethancourt to make the score 3-2 Los Angeles, but the Angels stopped them before they could tie.

But they did in the seventh.  Dusty Coleman hit a solo home run to tie the game at three.

The Angels answered in their half of the seventh, however, with Kaleb Cowart’s double to score a run and give the Halos the lead again at 4-3.  Catcher Jose Briceno singled to score Cowart and the Angels had a two-run lead again, 5-3.  They were able to carry that till the end and the Padres’ atrocious spring training continued.

Tomorrow, the Padres return to Peoria to face the Giants.  First pitch is at 12:10 p.m. and you can watch the game on FSSD.