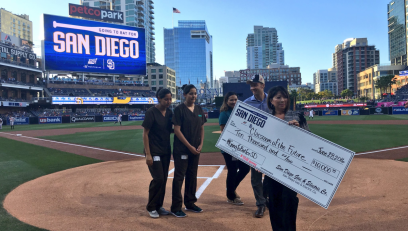 Photo:  the Padres and SDG&E recognize teachers as part of Homeruns for Homerooms before the game.  Courtesy @Padres on Twitter

June 28, 2016 (San Diego) – Remember those black birds from last week?  They’re back!  And so is Padres baseball!  The Orioles flew into San Diego for another two-game series against the Padres.  Ubaldo Jimenez started on the mound for Baltimore against Erik Johnson for the Padres.

The Padres couldn’t get the sweep last time and this series didn’t start much better.  Adam Jones homered right off the bat (pun intended) to give the Os a 1-0 lead in the first.

But Melvin Upton Jr. countered with one of his own in the Padres’ half of the first to tie the game at one.

The Orioles took the lead back in the fourth on Chris Davis’ sac fly, scoring Jonathan Schoop and the birds took a 2-1 lead.

And then in the fifth, it got away.  Hyun-soo Kim launched a two-run homer and the Os took a 4-1 lead.

The Padres did get some salvation in the seventh with Wil Myers’ three-run homer to make the score 11-4 and in the ninth on Adam Rosales’ two-out double to make it 11-6.  Yangervis Solarte hit a clean double to score Rosales and the score was 11-7.  But the rally was cut short and the blackbirds took game one 11-7.

Game two—the final game of this series—is tomorrow at 12:40 p.m.