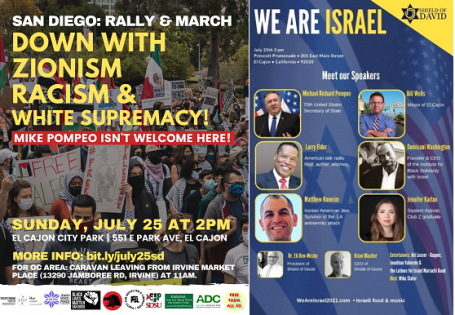 July 25, 2021 (El Cajon) – A rally and march in El Cajon is being planned today at 2 p.m. by pro-Palestinian groups, in reaction to a “We are Israel” rally slated for 3 p.m. at a separate location that Palestinian leaders locally describe as "Zionist" and "anti-Palestinian."

Organizers of the “We are Israel” rally at 3 p.m. on Prescott Promenade at 201 East Main St. have stated that their event is in response to the record number of violent attacks on Jewish people and synagogues in the U.S. and in San Diego County, not policies in the Mideaast.

Organized by Shield of David, that rally is slated to include former Secretary of State Mike Pompeo as keynote speaker and El Cajon Mayor Bill Wells as one of several other speakers, as ECM reported.  Pompeo, as Secretary of State under President Donald Trump, broke with decades of U..S. foreign policy tradition by declaring that Israeli settlements in the West Bank did not violate international law. But Pompeo also helped broker a peace deal between Israel, the UAE and Bahrain.

The pro-Palestinian counter-protest event is slated for 2 p.m. at El Cajon City Park, 551 E. Park Ave. in El Cajon. Jeanine Erikat, a leading member of the San Diego Chapter of the Palestinian Youth Movement  issued this statement: “It is deeply troubling that the mayor of El Cajon is welcoming this racist and white supremacist event to the heart of San Diego’s Muslim and Arab communities. Our communities were made refugees here by the same policies these Zionist organizations promote, and we continue to face repression by right-wing organizations in East County.”

No white supremacist organization is listed among sponsors of the pro-Israel rally, and some white supremacist groups such as the KKK have notoriously held anti-Semitic, anti-Jewish views. Some of the speakers at the We are Israel rally do, however, have ties to right-wing causes including Larry Elder, a conservative talk radio show host and gubernatorial candiate.

A press release for the “Down with Zionism Racism and White Supremacy” counter-protest event is sharply critical of the city and its mayor, stating, “The City of El Cajon is openly welcoming this rally to town, with Mayor Bill Wells speaking at the event and promoting the event via social media. El Cajon City, also known as “Little Baghdad,” is home to one of California’s largest Arab and Muslim communities, the majority of whom came as refugees or immigrants due to U.S.-driven wars in the Middle East.”

Community organizations issued a joint statement on July 20, 2021 voicing their opposition to the “We are Israel” event and urged their supporters to call-in and demand that Mayor Bill Wells pull out of the event.

The anti-Zionism group’s press release further states, “This anti-Palestinian rally comes after Palestinians, their communities, and allies across San Diego protested against the escalating Israeli military violence in May and June of 2021. Organizers of the community rally view it as a reactionary response to the growing movement for Palestinian rights across the US and around the world.”

At least one of its members acknowledges that anti-Semitic violence is a problem, but suggests the rally featuring Pompeo and Wells has a broader agenda.

Oren Robinson, an active member with the San Diego Chapter of Jewish Voice for Peace, says:

“The fight against anti-Jewish hate is real and urgent, but this anti-Muslim and anti-Arab event is clearly intended to silence Palestinians and divide our community. We join with Palestinians in calling on Israel to end the occupation. If Mike Pompeo cared about the Jewish community, he should first condemn his former boss Donald J. Trump's long track record of anti-Jewish remarks.”

The flyer suggests some counter-protesters are being bussed in from Orange County.

An objective witness to the actual event will tell you that it was mostly about self defense against increasing attacks on Jews as exemplified by speaker Matthew Haverim, an Iranian American Jew who was attacked by pro palestinian thugs for admitting he was Jewish. No matter how left wing groups spin it the truth is that anti zionism is anti semitism.