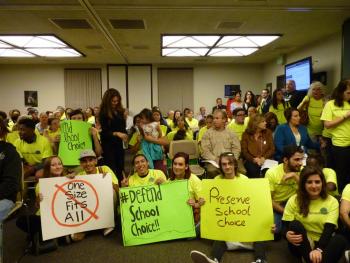 “You should be proud that a school like this is helping students out. Are you thinking of the students and our futures, or just yourselves and your money?”—Jackie Ramirez, 16, young mother and student at Diego Valley Charter

A lawsuit filed by the district seeks to shut down Diego Valley Public Charter, which serves at-risk  students including many Chaldeans and other minorities, drop-outs , pregnant students, and students who have aged out of the public high school system, as well as Julian Charter School-Alpine Academy. A hearing on the case is scheduled for June 10, 2016 at 8:30 a.m. before Judge Joan M. Lewis in San Diego Superior Court.

The District claims the schools are operating illegally without authorization of the district, arguing in the suit that “such schools are not accountable to the students and families they serve or the taxpayers on whose dime they operate and as such, violate the law.”  The schools are being operated as “resource centers”, not charters, by outside districts.

But supporters of the charter schools claim the district is interested not in the well-being of students being served, but by money – specifically, bringing state Average Daily Attendance (ADA) money back into the district’s coffers.  Attendance in the GUHSD has declined sharply – with much of that due to students leaving district schools to attend Diego Net and Julian Charter School in Alpine.

Board Chair Robert Shield announced that only 20 minutes of testimony would be allowed and that due to many speaker slips received, only some speakers would be allowed to address the board.  He said those were chosen in a “randomized” process 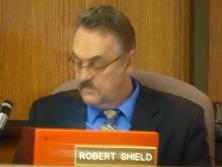 and threatened to clear the room if the crowd did not “contain your enthusiasm.”

Catherine Dennett, a parent with a son at Julian Charter School in Alpine, asked the board to “understand who you are hurting by closing” the charter high school, which is less than a mile from her home. (Alpine has no public high school and the district has sued parents trying to prevent bond funds from being used to build one.)  “My son has many special needs, but despite that he has become a superstar,” said Dennett, adding that her son has maintained a 4.0 grade point average all four years. “Why are you taking this away from him?” she asked. “I know that he has the ability to make the world a better place in the future.”

Her son, Robert Dennett, said the school has helped in thrive through programs in sports, student government and performing arts  where some teachers volunteer.  He said the school has given him a “strong foundation to be a lifelong learner” and said he would not be successful without Julian Charter in Alpine.  He called the board’s actions “heartbreaking.” 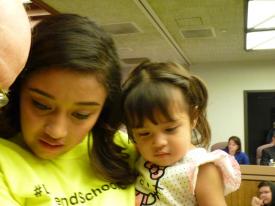 Jacqueline Ramirez, 16, brought her young daughter to the podium with her.  She said she became pregnant while attending Granite Hills High School.  “I was criticized by my teachers and other students…they started spreading rumors about me,” she said, adding that a P.E. teacher forced her to run despite being pregnant. She then transferred to El Cajon Valley and back to Granite Hills, where she was told she could not graduate due to missed credits.  A counselor tried to discourage her from transferring to Diego Valley Charter, but she says, “She could not have been more wrong, because Diego Valley is perfect for me.”

Now she has a flexible schedule to care for her daughtger and can even bring her child to school if she can’t find a babysitter.  Teachers at Diego are “supportive…they’re not judgmental” she said, noting that the school provides an option for students 18 or older to still get their high school diploma.

“You should be proud that a school like this is helping students out. Are you thinking of the students and our futures or just yourselves and your money?” she asked.

Craig Beswick, principal at Diego Valley, urged the board to “stop wasting public education resources on yet another lawsuit. “  He noted that 60% of Diego Valley’s students are over 18 and aged out of the GUHSD system, either dropped out or so far behind in credits that they couldn’t catch up.

“Teen parents, recent immigrants, special needs students, bullied students, working students, disillusioned students…regardless of their obstacles, our programs address their specific needs. We turn dropouts into high school grads—which as educators, is all of our responsibility.”

At Diego Valley, 86% of students graduate and 40% go on to college.  Of the 600 students, over 120 are Chaldeans from Iraq.  A quarter of the students are parents and almost 25% of students are English language learners.

Cloey Peel, 16, said her experience as a student at Julian Charter School’s Alpine Academy has been “amazing.”  She explained, “I have a disability in my legs, and I can’t walk around for very long.”  She wasn’t able to take a bus at 5 a.m., possibly in a wheelchair, nor could she manage to walk around a campus the size of Steele Canyon. 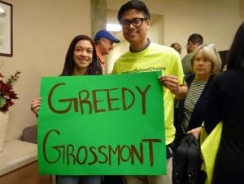 She has spent weeks in a hospital or on bed rest for her condition, she said, adding that at the Alpine Academy, “Everyone is cooperative and makes me feel like I belong at this school.”

Charles Schechter urged the board not to target Dehesa Charter School, one of several other charters that some present indicated the district is also waging war upon with pending legal challenges.  “Focus on education and stop attacking charters that clearly fill an unfulfilled need,” he urged.

Selena Rangel, a 19-year-old at Diego Valley, said her older brothers had “bad reputations and the teachers would automatically judge me” at Monte Vista, where she also said teachers didn’t push her academically.  She also went to Chaparral, a continuation school, where she also found fault with the teachers.  “As soon as I came to Diego Valley, they were already offering me better help. My teacher and the tutors actually talk to me one-on-one,” she told the board.  Teachers at Diego would call her to make sure she did her homework and soon her grades improved; now she has nearly enough credits to graduate.  If the district shuts down her school, she said she won’t return to the Grossmont District. “Why would I go back to something that I’m not comfortable with and I already know doesn’t work for me?”

Bob Stewart, CEO of the nonprofit ACCESS that helps meet needs of vulnerable and under-served populations locally, said Grossmont’s 25% dropout rate is worse than the state average of 80%.  He praised Diego Valley for providing a “safe supportive environment” where students can get one-on-one attention, noting that too often, dropouts wind up in jail, on welfare, or unemployed.

“Over the past two and a half years, more than 150 of our at-risk youth—youth who had dropped out of school or who were in trouble with the law, and who were enrolled simultaneously at Access and Diego Valley, became at promise youth,” he said, adding that they graduated and enrolled in paid internships.  “Please stop your attacks on Diego Valley and its students,” he urged.

A flyer handed out by organizers of the “Defend School Choice Rally” indicated that over 1,000 students are at risk of being shut out of charter schools in the Grossmont District due to a “series of lawsuits by the GUHSD that aim to shut five charters.”  (Note: Only Diego Valley and Julian’s Alpine Charter are named in the lawsuit document provided to ECM thus far.)

Grossmont isn’t the only district seeking to shut down charters that draw ADA money out of the district’s coffers.  Countywide, nearly a dozen charters are the targets of lawsuits by school districts, with 5,000 students at risk of having their schools closed if the suits succeed. Many of those students have disabilities or are disadvantaged, at risk of dropping out. 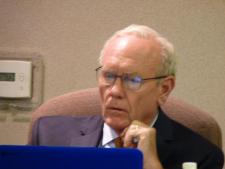 Because the item was not on the agenda, the board could not address the public comments. But Board President Robert Shield stated, You have been heard and I will have certain questions to ask the Superintendent.” (photo, right: Superintendent Ralf Swenson)

Board member Priscilla Schreiber (photo, left) told East County Magazine that she was not informed of the district’s legal action targeting charters and “had no idea what I was walking into tonight.”  She minced no words, calling the board majority “bullies” for its actions.

Schreiber noted that 50% of the district’s declining enrollment is due to students transferring to Diego Valley.  Moreover, she observed, “60% of the students there are aged out (over 18) so they couldn’t go to the Grossmont district anyway.”

She said the district is realizing “a day late and a dollar short” that it has not done enough to meet the needs of Chaldeans and other students.  The district recently build new career technical educational building  at the Chaparral campus, among other expansions to go beyond alternative education and ultimately serve 600 students. 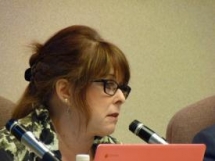 ard majority for seeking to evade the enrollment trigger in bond measures that would compel building an Alpine high school, since enrollments in an alternative education school such as Chaparral doesn’t count toward that trigger.  “So they are building that out to 600, instead of getting to 800 at Alpine,” Schreiber pointed out.

Rubbing salt in the wound for Alpine families, the board also voted 3-2 (with Schreiber and Jim Stieringer opposed) to go into over a half million dollars more debt to continue the legal battle over an Alpine High School.  Alpine taxpayers and the Alpine Union School District sued the GUHSD and a judge ordered the  GUHSD to set aside money to build a high school for Alpine. An appellate court found that two bond measures compel the district to do and a judge has urged the district to settle the case, but instead the board majority opted to continue its legal fight with Alpine. 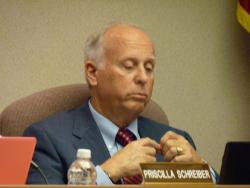 Stieringer (photo, right) stated, “I feel this suit is crying out for a settlement.”

Schreiber asked several pointed questions faulting the Superintendent and Board majority for incurring more debt and not having the Citizens Bond Oversight Committee weigh in, but Chairman Shield repeatedly interrupted her, insisting her two minutes was up and calling her tone “unprofessional.”

Nick Marinovich, a former member of the Citizens Bond Oversight Board, gave testimony criticizing the Citizens Bond Oversight for failing to provide oversight of the use of bond funds for the lawsuit. It is unclear whether the District informed the oversight committee of the suit or if opportunity for oversight was provided.  He warned that the  District could wind up like Poway (which incurred nearly a billion in debt on a much smaller bond amount) and suggested undue influence on decisions involving a future bond issue. “It’s a dirty secret that campaign money influences bond decisions,” he concluded, adding that he had been “threatened” by one of the board’s consultants.

As if those weren’t enough fireworks for one day, attorney John Lemmo representing Diego Valley charter also served the district with notice that it is in apparent violation of the California Voting Rights Act, ECM has learned. The letter asks the district to immediately initiative a change in how its district voting lines are drawn up to assure adequate representation of minorities such as the community’s large Chaldean population.

The City of El Cajon recently voted to take action to move toward district elections due to its large Chaldean population.

To prove a violation of California’s Voting Rights Act, a minority group must show that it lacks representation on a governing board and that discriminatory actions have occurred.  The district’s failure to provide adequate programs to help struggling students succeed while trying to shut down Diego Valley Charter, a school serving predominantly Chaldeans and other minorities, may well feed into the arguments of those who contend that  the district is discriminating against minority students.