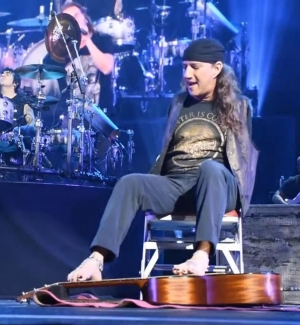 March 14, 2021 (El Cajon) – Mark Goffeney, the internationally acclaimed armless musician known as “Big Toe” who inspired people around the world, was found dead on March 2nd in his El Cajon apartment along with his wife, Annmaree. Both were 51. An autopsy will determine their causes of death.

Born without arms in 1969, Goffeney inspired millions with his can-do attitude. He learned to play the guitar and bass with his feet, strumming with his left foot and forming chords with his right.  He was nominated in an Emmy award in 1999 for his role in a Fox commercial, “Feet”, which later aired during the Superbowl in 2000 and 2001.  He’s performed around the world with many top celebrities, also appearing on an array of TV shows.

His fame began at age 4, when he became a poster child for the March of Dimes and Variety Club.  He co-hosted dozens of telethons, along with celebrities such as Monte Hall and Kathy Lee Gifford, raising millions of dollars for charities to benefit children. He was also a guest on TV shows including Regis Philbin and the Mike Douglas Show.

His musical aspirations began as a child.  He first played trombone in a school band. At age 9, his father bought home a guitar. He learned to play guitar, bass, and later in life, the harmonica with a specially adapted holder.

“As a musician, I am always looking to up my game,” he said of the latter  “That haunting sound literally gives me goosebumps.”

In the late ‘90s, he cut a CD titled “Big Toe” that was named in the San Diego Reader’s “Best of the Best.”  For the CD, he worked with Steve Dudas, former producer of Ringo Starr, Aerosmith, and Ozzy Osbourne. The CD featured Goffeney’s original songs.

He attended Grossmont College, married and had three children.

Goffeney formed a band, Big Toe, that has performed on the FOX TV program “The Next Great American Band,” created by Simon Cowell of “American Idol” and on NBC.com’s “Star Tomorrow” show.  Goffeney has since appeared in concerts around the world. He enjoyed entertaining others; locally, you may have seen him performing in Balboa Park. Learn more about his music at his website, Big Toe .

His Big Toe bandmate, James Neal, posted this message on Facebook after learning of Goffeney’s passing. “I would like to thank everyone who supported BIG TOE and wish his family well in this sad time. I will be including `We Are the Same’ in my future set list as a tribute to a great musician and friend…God bless you, Mark, keep rockin’ in heaven.”