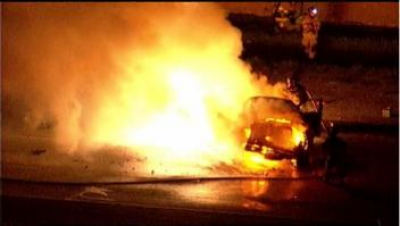 February 8, 2016 (San Diego’s East County) – Good Samaritans pulled the injured driver of a pickup truck out to safety moments before the vehicle caught on fire early this morning following a four-vehicle collision on State Route 52 just west of Santee.

The rescued man was driving a gray Ford F-150 pickup eastbound near Santo Road at 5:47 a.m. when for unknown reasons, he ran into the rear of a big rig truck, said Officer Tony Contreras with the California Highway Patrol. The Ford spun around and was broadsided by a black Dodge Ram pickup. The Dodge was then struck by a black Buick sedan.

Eastbound lanes on SR-52 were temporarily closed for the investigation and cleanup.