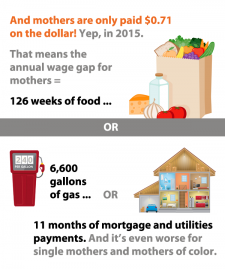 April 15, 2015 (San Diego’s East County) - April 14th was Equal Pay Day.  The date was chosen to show how many extra days each year women must work to earn the same as men.  This year, we didn’t catch up with men’s earnings last year until April 14th.

April 9, 2014 (Washington D.C.) – As a slap in the face to women on Equal Pay Day today, Senate Republicans blocked passage of the Paycheck Fairness Act for women – for the third time. The measure failed due to lack of a single Republican vote. The bill had aimed to provide more effective remedies for women who are paid less than men for the same work.