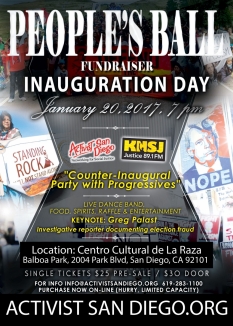 January 13, 2017 (San Diego) – Activist San Diego,  the nonprofit owner of KNSJ radio,  is hosting its annual “People’s Ball” on January 20th,  which this year falls on the presidential inauguration date.

The event will be a “counter-inaugural” featuring a live dance band, food, spirits, raffle and a keynote speech by Greg Palast, investigative reporter and filmmaker known for exposing schemes to steal minorities’ votes.