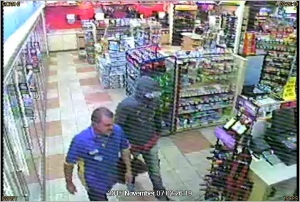 November 11, 2015 (La Mesa) – La Mesa Police have released surveillance photographs of the suspect who robbed the AM/PM Gas Station in La Mesa this past weekend. The suspect was armed with a rifle when he entered the store at approximately 1:25 AM on 11/07/15. 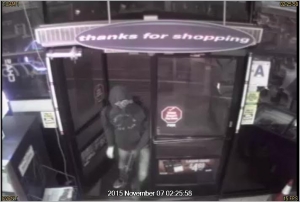 The suspect is described as a light skinned black male adult in his 20s, approximately 5’9” tall, with a thin build. He was wearing a blue and gray hooded sweatshirt, blue jeans, and a baseball cap. The suspect also wore dark sunglasses and had the hood of his sweatshirt up over his head.

The investigation is ongoing and investigators are asking for the public’s assistance in identifying the suspect. Anyone with information is encouraged to call Detective Gremillion at (619) 667-7539.

You may also call Crime Stoppers’ anonymous toll-free tip line (888) 580-TIPS (or www.sdcrimestoppers.com).  You can remain anonymous, and be eligible for a reward of up to $1,000 for information in this case