Photo, left: Sunrise seen from the ancient Kumeyaay observatory on Cowles Mountain. The larger mountain to the left of the sun is Lyons Peak.

December 22, 2017 (Deerhorn Valley) – Deerhorn Valley Antler editor Kim Hamilton sent in these beautiful shots taken by Don Endicott on a winter solstice several years ago.  In her email today, she writes: December 21—Today is Winter Solstice.  Did you know Deerhorn Valley is the site of ancient Kumeyaay "Solstice Rocks?

Photo, right: A closer view looking from the east toward Deerhorn Valley shows the three spires and the sun disc split in half on the day of Winter Solstice.

Winter Solstice is the shortest day of the year, and the first day of winter. Here is Deerhorn Valley we have a very special and ancient site associated with the Winter Solstice.  Some 20 miles away on the east-facing side of Cowles Mountain, is found the site of an ancient Kumeyaay observatory.  Here generations of Kumeyaay people would come together to watch the sunrise and celebrate solstice, the time the sun begins its journey south along the eastern horizon.

From this site, looking east to the horizon stands a craggy pinnacle with three upright granite spires— enormous boulder that, for a moment, appear to split the sun in half. That distant pinnacle with its spires lies right here in Deerhorn Valley. 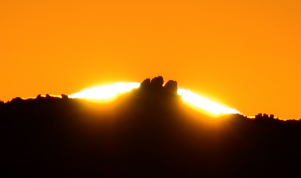 Photo, left: and an closer look...

From the Deerhorn side, you can catch a very brief glimpse of the spires as you descend Deerhorn Valley Road toward Honey Springs.  Look off to the right toward a slope just to the left of Lyons Peak.  There they stand... three towering boulders that serve as a marker for ancient astronomers, who had climbed the mountain we call "Cowles" and watched the sun rise on Winter Solstice.  The days would now become longer, and nights shorter.  I wonder what they called those spires? The ones we call Solstice Rocks?