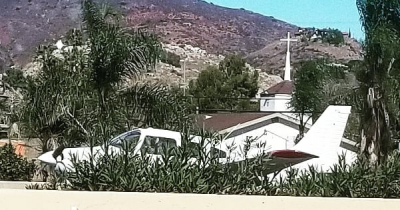 October 19, 2018 (El Cajon) – After losing engine power aboard a small plane, a flight instructor took over controls from a student pilot and made an emergency landing on westbound Interstate 8 in El Cajon.  The flawless landing avoided damage to the aircraft, vehicles on the freeway or property; no one was injured.

The pilot, 25, and student pilot, 36, both of San Diego, were inbound to Gillespie Field in El Cajon when the emergency occurred, said Officer Travis Garrow with the California Highway patrol.

Two lanes were blocked briefly until the aircraft was pushed to the shoulder, blocking the Mollison Avenue off-ramp which remains closed while the plane’s wings are disassembled for removal from the Interstate.