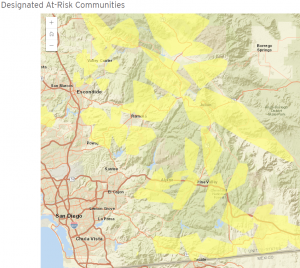 October 28 2019 (San Diego’s East County) – With the strongest Santa Ana winds of the season forecast Tuesday through Thursday,  San Diego Gas & Electric is warning over 32,000 customers that the utility may proactively shut off power to many communities to prevent lines from sparking fires, including some areas not previously impacted by outages.  The outages could begin late Tuesday or early Wednesday and last as late as Friday evening, according to SDG&E.

The communities that may lose power are:

Steps to prepare for an outage