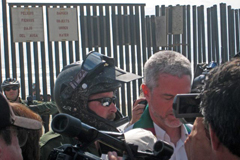 June 5, 2014 (San Diego)--Last week, the U.S. Customs and Border Protection agency (CBP) finally released a report written by the Police Executive Research Forum (PERF) in February of 2013, which criticized the Border Patrol’s Use of Force policies. The release comes after months of public pressure applied by faith leaders, border communities, and law enforcement since the leakage of some of the report’s findings last November. This event marks a significant victory for those who oppose excessive use of force and support increased transparency in government agencies.