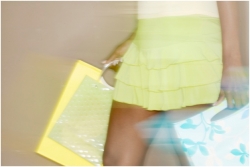 November 27, 2011 (Escondido) – Escondido Police are searching for a peeper caught on videotape rubbing up against female shoppers and taking photos up their skirts. The incidents occurred at the Westfield North County Fair in Escondido yesterday around 2:30 p.m. during the “Black Friday” shopping rush.

According to ECM news partner 10 News, the suspect was described as a black man with a military-style haircut. He wore a light blue shirt, jeans, and carried an Am erican Eagle Outfitters shopping bag.

The man was caught on videotape at J.C. Penney, however he may have been in other stores or locations. Authorities caution that he may have photographed women who “don’t even know they’re victims,” Lt. Neal Griffin told 10 News. Women shoppers are advised to be aware of surroundings and report suspicious behavior.