October 25, 2011 (San Diego’s East County)—While the President announced the end of the Iraq War (bringing all troops home for the holidays—permanently) and rolled out a jobs bill to put Americans back to work, Republican candidates announced plans to cut off student aid, deregulate Wall Street robber barons, and jack up taxes on the poor and middle class. No, I’m not making this up.
Granted, it wasn’t a perfect week for the President or Democrats. Obama’s American Jobs Act  got shot down in the Senate by Republicans—even though the bulk of spending was for infrastructure creation, a goal supported by both the U.S. Chamber of Commerce and the AFL-CIO.
While the GOP had no problem spending money on war, its members seem to practically break out in hives over the prospect of *gasp* spending a far smaller amount to put Americans back to work.
On the campaign trail, meanwhile, the GOP candidates seem irrationally dead-set on driving away as many voter groups as possible.
“You have a lot of support among young people,” NBC’s David Gregory complimented Ron Paul, who recently won a straw poll among California Republicans for the presidential race. “They’re borrowing to pay for college at record levels. Would you abolish all federal student aid?”
Paul admitted, “Eventually.” (Hey kids, are you paying attention? If so, there goes the youth vote.) No Republican has offered a plan to help college students, instead vying to see who can gut public education spending the most.
Republican presidential contender Herman Cain, Godfather pizza magnate and former lobbyist for the restaurant industry is taking heat for his ‘9-9-9’ tax plan.   Under the plan, taxpayers would fork over a 9% income tax, 9% business flat tax, and 9% for a new national sales tax. That’s ON TOP OF what you’re already paying for California sales tax, local sales tax, and California income tax. Cain’s plan gets rid of lots of taxes on the rich, such as estate taxes, taxes on dividends and capital gains, and the payroll tax, which funds Social Security.
Robertson Williams of the Urban-Brookings Tax Police Center says the plan “shifts more of the tax burden away from the rich and toward the poor.”
Mother Jones magazine puts it this way. “Unless you’re really rich, your taxes will go up! If you earn, say, $50,000 per year, you currently pay about 14.3% of your income in federal taxes. Under Cain’s plan, you’ll pay 23.9%. Whee! And if you make the big bucks? Well, millionaires currently pay about 32.9% of their income in federal taxes. Under Cain’s plan, they’ll pay 17.9%. Ka-ching!” (This should drive away the middle class voters and poor folks.)
Still unclear on just how rich you have to be to benefit from the 9-9-9 plan? Here’s a handy chart: 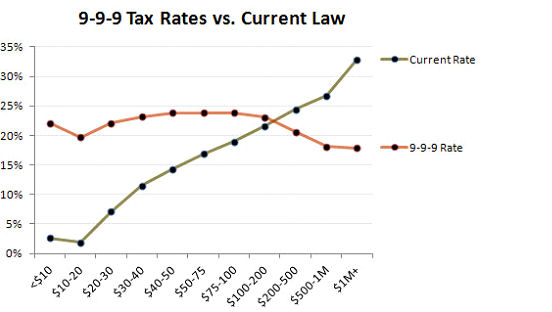 Leading GOP candidate Mitt Romney supports a national sales tax.  He’s also taken in more Wall Street money than his competitors. He wants the federal government to stop wasting money on disaster relief for folks who lose their homes in wildfires or tornados, a position shared by Ron Paul.  (Disaster victims, and those in disaster-prone regions, must be seeking out other options on their ballots.)
Dr. Carroll Estes with the National Committee to Preserve Social Security and Medicare observes that “Mitt Romney is a proponent of George Bush’s privatization plan that would have allowed Wall Street bankers to gamble with millions of Americans’ retirement savings.” She called him “just as wrong” on Social Security as Rick Perry. (Bye bye, senior citizen voters!)
If you haven’t been living in a cave, you’ve probably heard something about those rallies against big financial institutions taking place in 950 cities around the world. That includes Occupy Wall Street and here at home, Occupy San Diego.
A Time Magazine poll found that 54% of Americans said they have a favorable view of the Occupy Wall Street protests. Most of the rest weren’t sure. Only 27% had a favorable view of the Tea Party.
So what do the Republican presidential candidates want to do? Why, deregulate Wall Street even more! Michelle Bachmann’s bill, H.R. 87, would repeal Dodd-Frank—the Wall Street Reform and Consumer Protection Act. The Washington Post says of Bachmann’s bill, “If passed, Wall Street would be operating inside the exact same regulatory structure it had in the run-up to the crash.”
Cain, Romney and Paul also want to repeal Dodd-Frank. But some want to go even farther. Paul says of the Sarbanes-Oxley act, “Let’s repeal that, too!” Sarbannes-Oxley was passed after the Enron scandals to make financial statements more trustworthy.
These and other statements led the Washington Post writer to conclude, “So three years after the worst financial crisis since the Great Depression, the consensus in the Republican Primary is that we should deregulate Wall Street not just to where it was before the bubble burst, but to somewhere nearer to where it was before Enron crashed.”
I can hear the “occupy” supporters marching away from the GOP in droves, can’t you?
Then there are the women voters—and men who care about women’s lives. Republicans in the House passed what critics call a “let women die” bill earlier this month. It allows hospitals to refuse to treat or transfer women who need abortions to save their lives. Herman Cain, who initially waffled on choice, affirmed in a TV interview that he opposes abortion even for rape, incest, or to save the life of a mother.
Just how is killing women pro-life? He justifies his stance by claiming these cases are “rare.” Not true. But even if it was, why put ANY woman’s life at risk?  Is an egg, or a fetus, more important than a Mom who may have other children to care for?  Polls have shown the vast majority of Americans, even those who consider themselves pro-life/anti-abortion, want exceptions for victims of rape or incest and to save a woman’s life.
Women who are willing to gamble their lives—and their daughters’ lives—on never having a life-threatening situation during pregnancy such as cancer, high blood pressure, certain heart conditions, an accident requiring emergency surgery, or a tubal pregnancy, may blithely vote Republican. Anyone who wants to protect women’s safety will look elsewhere when voting.
So who does that leave in the GOP tent? Wall Street bankers. Wealthy folks. Women haters.
As for calls for cutting government spending, the President just did. Bringing home all troops from Iraq will save $720 million EVERY DAY. $7.2 billion every 10 days; $72 billion every 100 days.
By around 600 days, ending the war alone would cover the full $450 billion cost of the President’s jobs bill, much of which was already paid for in other means. Of course, the jobs bill would also put lots of Americans back to work would ultimately mean they’d be earning money and PAYING taxes again, offsetting most if not all of that cost—and we’d have better roads, and safer bridges to show for it. We’d also replace firefighters laid off (a big problem here in San Diego, where 72 Cal-Fire firefighters have lost their jobs, leaving us short-handed going into fire season).
Wouldn’t you rather spend money on hiring back firefighters than on rebuilding East County again after another devastating wildfire?
I sure as hell would!
Buck Shott has done political consulting on both sides of the political aisle. The opinions expressed in this column reflect the views of the author and do not necessarily reflect the views of East County Magazine.

I agree with author that bringing home all troops from Iraq will save $720 million EVERY DAY. $7.2 billion every 10 days; $72 billion every 100 days. Its really big cost and ultimately this burden is being shifted to general public in terms of taxes or reduced facilities. Thanks Social Security Number Search

This article should be labeled an "opinion" article, not a news report about politics. It is extremely biased and is surely not any kind of fair and balanced "journalism". ECM should be careful about how they label articles, so readers can understand when it is opinion and a report about facts. It seems ECM has an ongoing problem with NOT providing issues from both (or multiple) sides and leans towards representing the liberal side of arguments more. The article author is way on the liberal left. He is entitled to his "opinion" in the public square - as is everyone. However, respectfully, in my opinion he is extremely incorrect in many of his statements and conclusions.

I couldn't have said it better. Most of ECM's articles are woven tales told by people using pseudonyms.