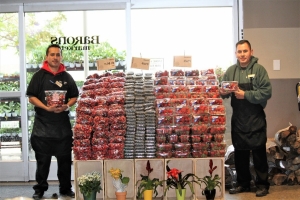 Photo:  Juan Carlos Peñaloza and Jonathan Borges at Barons Market getting the Cherries and Berries ready for the day.

May 8, 2017 (San Diego’s East County) -- The cherry season has started! California cherries are available and the California peaches and nectarines are also just starting to come in – but the best tasting fruit still has a couple of weeks to go.

Cherries always start becoming available at the beginning of soft fruit season. For me, being a produce manager for almost 40 years, it marks the time when the produce season is changing. Finally, something to buy in the produce department besides apples and oranges. I snack on cherries off and on all throughout the day. I can put cherries on almost anything. I like to top off my green salads with a few cherries, or add some cherries to my smoothies, and of course put a few cherries in my low-fat yogurt.

First of the season cherries come from northern California. The largest producing county for California cherries is in the center of the state in San Joaquin County near the small farming town of Lodi. This is where the traditional Bing cherry variety is grown because of the ideal climate that provides cold winter temperatures and warm, but not too hot, temperatures in the spring and summer months. California has a short season and then the Washington crop starts to roll in. Nothing against the California cherries, but the best cherries are Washington grown.

There are many varieties of cherries, the one we are most familiar with are the Bing variety. Usually the start of the season brings in varieties Brooks and Coral and then shortly after starts the Bing variety. The Brooks and Coral varieties are early season and are just as tasty as the Bing’s. One variety that is a favorite of mine is the Rainer, formerly known as the Queen Anne Cherry. A large yellow cherry with a red blush and light yellow flesh. The Rainer is particularly tasty, with high sugar levels, this premium variety comes a bit later in the season. We should see Rainer Cherries mid-June and crops should be plentiful this season for good consumer prices.

A little history of the cherry:  sweet cherries originated in Asia Minor in the fertile areas between the Black and Caspian seas and were likely brought to Europe by birds. The Greeks were the first to cultivate cherries and the Romans continued to increase and expand production. Cherries came to the U.S. with English colonists in 1629 and later were introduced to California by Spanish missionaries. In the 1800s, sweet cherries were moved west by pioneers and fur traders to their major sites of production in 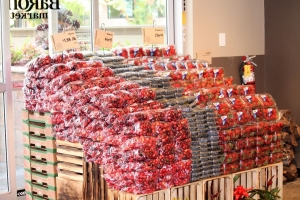 The cherry has entered our culture and language in so many ways.  For example, the phrase “Life is a bowl of cherries.” T Cherries are synonymous with the best of the best, i.e., “That car he’s driving is a cherry.” One I see often happening in the produce department: “There they go again cherry-picking the fruit.” But that’s okay, because that’s exactly what I do when picking out my fruit. 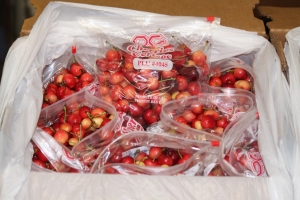 “Cut my pie into four pieces, I don’t think I could eat eight.”

Cherry Pie is quite possibly my favorite of homemade fresh fruit pies.  It used to be a rather time consuming endeavor until I found the perfect cherry pitter.  I have at least a half dozen pitters that I have picked up over the years but my most preferred by far is the OXO Cherry Pitter with a spatter guard.  I include with my recipe below ingredients and directions for a two-crust pie pastry.  However, as a rule I buy my pastry shells from the store. 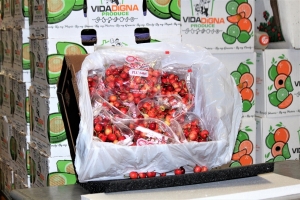 In a large saucepan, combine sugar and cornstarch and gradually stir in cherry juice until smooth.  Bring to a boil; cook and stir for about two minutes until thickened.  Remove from heat.  Mix in the cherries, cinnamon, nutmeg and almond extract.  Set aside and prepare pastry. 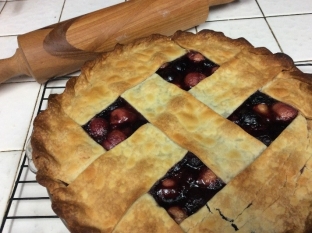 In a large bowl, combine flour and salt; cut in shortening until crumbly.  Gradually add cold water, tossing with a fork until a ball forms.  Divide pastry in half so that one ball is slightly larger than the other.

On a lightly floured surface, roll out the larger ball of pastry to fit a 9-inch pie plate.  Transfer pastry to pie plate and trim even with edge of pie plate.  Add filling.  Roll out the remaining pastry – trim, seal and flute edges. 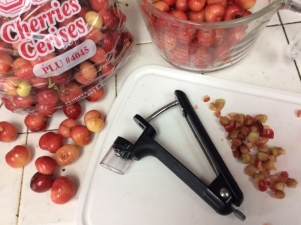 I generally don’t make my own barbeque sauce unless I have forgotten to buy any.  And then I wish that I made it more often as it is far better than any commercially produced sauce.  Below is a recipe for a home-made barbeque sauce with fresh cherries.  It tastes remarkable on pork ribs and chicken.

In a large saucepan, sauté onion under tender.  Add garlic and cook another minute longer.  Stir in the remaining ingredients.  Cook, uncovered, over medium heat for 20 minutes or until cherries are tender and sauce is thickened, stirring occasionally.  Yield: about 3-1/2 cups

Using a large saucepan combine sugar, cornstarch and cinnamon.  Stir in water until the mixture is well blended and smooth.  Add fruit and butter to the pan and cook on low until the mixture comes to a boil and thickens.  Place the filling into a buttered 8-inch baking dish.

Mix the flour and 2 tablespoons of sugar, baking powder and salt in a large bowl.  Using a fork blend the softened butter into the dry ingredients until you have coarse crumbs.  Stir in the milk until just moistened.  Drop the topping over the filling in tablespoons until covered evenly. Sprinkle the remaining 2 tablespoons of sugar over the topping and bake 30-35 minutes in preheated 400-degree oven until the top is golden brown.