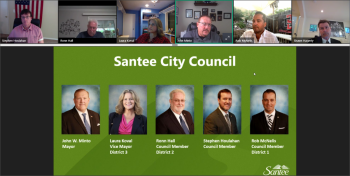 June 14, 2020 (Santee) -- Santee’s City Council looked at itself in the mirror after a fortnight of national protests and rioting following the death of George Floyd, and found the reflection wasn’t all that great.

Stunned by an outbreak on several nights of blatant racist taunts and violence, allegedly by outsiders, the leaders of the predominantly white city said they need to conduct some serious soul-searching about their attitudes regarding race.

“Maybe this city has buried its head in the sand for too long,” said Mayor John Minto during the Council meeting held virtually on Zoom. “If the perception that (racism) is here, then it’s here.”

Councilman Rob McNelis, who has often publicly denied allegations of racism in the city, said he took full responsibility for being among those who did indeed ‘bury his head,’ unwilling to look at how many people of color say they are treated.

Councilman Stephen Houlahan acknowledged McNelis’ change of heart and gave him kudos for showing up at the June 7 protest organized by Black Lives Matter advocates.

Houlahan and McNelis were joined by Vice Mayor Laura Koval at the BLM protest that drew some 500 participants and wasn’t marred by violence.

Houlahan held up a sign he carried at the event that simply contained an equal sign (=). “This says, `We are all equal’…and that means everyone,” he said from his home during the teleconferenced Council meeting that drew 73 attendees.

“If the line, “Black lives matter,” makes you upset you need to look within yourself,” Houlahan said. “Saying Black lives matter doesn’t mean white lives don’t matter or people from Asia don’t matter. We need to shine a light on racism and smother messages of hate with love,” he added.

During an extensive public comment period at the Council’s June 10 meeting, a city clerk staffer read several scathing criticisms of the all-white, five member board for the councilmembers’ collective performance during the protests.

“During this past crisis, how come the Mayor didn’t hold press conferences?” he wrote. “Next time you need to address your city, Mr. Mayor. Your residents and business owners were concerned and they were looking for a view of leadership on the public stage. They didn’t get that. Most of last week, you were asleep at the wheel relative to communication.” 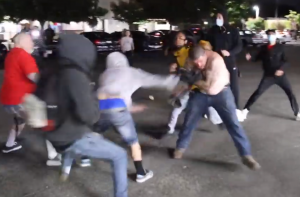 Several emailers decried “Defenders,” a loose- knit, hastily organized group that was ostensibly formed to protect Santee businesses from looters and vandals, but was quickly co-opted by blatant racists intent on beating up and intimidating protesters, according to many accounts including several ECM reports, one of which included a brawl caught on video and a photo of a youthful BLM protester bloodied after being punched in the nose: 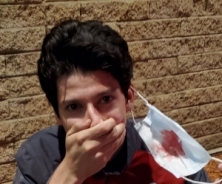 “Despite the First Amendment protections, these ‘defenders’ do not have any right to stop people and interrogate them. That is why we have the police,” wrote Gloria Jordan, who described herself as a minority and a participant in in the Sunday marches. She said she felt scared when some defenders drove back and forth, “trying to intimidate and were also parked at Target doing the same.”

Kimberly Hansen wrote that Santee has a known reputation as a bastion of racism. “Citizens of Santee are strongly asking, if not demanding, that Santee stand up and speak out against this negative influence that has found safe haven in this city. ….At this point in time it will be seen as a moral failing to not DO SOMETHING about this city’s reputation. In 2020 it’s NOT ok to be casually known as “Klantee.”

Mike Forzano wrote that he was involved in creating the Santee Defenders but in the first two days, “there was an absolutely disgusting display of racism, drinking and fighting taking place in front of Union Bank.”

In his email, Forzano described taking back one corner of the city’s main intersection at Mission Gorge and Cuyamaca Street on a third night of protests, asserting to everyone that came there, “No racists are allowed to defend! It was sad to see how many people left and did not support us just because the defenders wouldn’t let them drink or be racist,” he wrote.

Minto said initially the Defenders were focused on ensuring rioting didn’t destroy Santee’s downtown as it had in La Mesa. Yet some people he described as being “haters, white supremacist, and neo-Nazis” infiltrated the group, and instigated violence. He said early in the protest cycle, during the first few nights, the Sheriff’s Department “had glitches,” in keeping the peace but by the third night “they got it right.”

For days following the riots in La Mesa of May 30, social media sites were burning with posts and warnings of further violence and rioting in Santee, some of which were attributed to a white nationalist group. Starting May 31, Santee declared a state of emergency and curfews for several nights although some were instituted with short notice, declared erratically, and changed boundaries of the curfew.

Things got so tense at the end of last week that many storefronts along the Mission Gorge Boulevard/Cuyamaca Street intersection were boarded up. Santee City Manager Marlene Best sent out a letter on June 6 to local business owners and property managers asking that they “not allow or encourage armed individuals to be located on the rooftops of your businesses or shipping centers.”

The stress of dealing with numerous protests and preventing a major riot apparently got to Councilman Ronn Hall, who said at the Council’s emergency meeting June 5 when he thought the mic was off, “Did I say enough to kiss ass enough?”

That comment was broadcast and replayed on other social media outlets, giving Santee yet another negative incident to deal with. Despite Hall’s apology and insistence that it was “absolutely stupid” the remark caused several emailers at the June 10 meeting to call for his resignation.

Hall addressed the comment at the June 10 meeting, saying he was overwhelmed by the continuous stress from the protests that was exacerbated by social media postings. He said one of the best things that can happen is the city’s July 4th celebration and fireworks that will occur at two sites, at Town Center Community Park east and West Hills Park.

“I’m concerned for this community and we need to heal. A lot of things need to change but it won’t happen overnight,” he said.

Minto presided over the first meeting of an expanded Community Oriented Policing Committee (COMPOC) June 8, introducing three new members. The committee generally advises the Sheriff’s Department about crime issues, but is expanding its direction to address race and intolerance.

Minto said the city may hold virtual forums about the issues that have erupted in recent weeks, and need to be addressed. “The idea is that we hear from every single person in this community who feels harmed,” he said.