Skip to main content
By José A. Álvarez, County of San Diego Communications Office
The Southern California intensive care unit (ICU) bed capacity has dropped below 15%, and the state will require San Diego County to implement a Regional Stay Home Order that prohibits gatherings of any size and closes operations in multiple sectors, including restaurants, bars, wineries and personal services.
The current ICU capacity for the Southern California region, which includes San Diego and 10 other counties, is now 12.5%. The order will go into effect Monday and will last for at least three weeks or until the region’s ICU capacity meets or exceeds 15%. The order will be assessed by the state on a weekly basis after the three-week period.
"Lives are at stake, so this action is necessary," said Eric McDonald, M.D., M.P.H., medical director of Epidemiology and Immunization Services at the County Health and Human Services Agency. "We must restrict our activities and avoid contact with others to reduce transmissions of COVID-19."
Among restrictions that go beyond the current Purple Tier that already apply to San Diego:

Story and photos by Jake Rose

Photos, left: Parishioners at Skyline Church flock to indoor services, many without masks

Purple tier restrictions started at midnight Saturday, due to rising numbers of Covid-19 cases. Purple tier, or Tier 1, is the most restrictive level for California and comes into play when positive tests exceed 8%. Many non-essential business operations must close, places of worship, restaurants and gyms must move all activity outdoors, and retail must cut capacity to 25%.

With businesses already struggling after the initial lockdown followed by an overall slowdown due to the public’s worry about the coronavirus, this second lockdown has some businesses and places of worship around East County flouting the new restrictions. 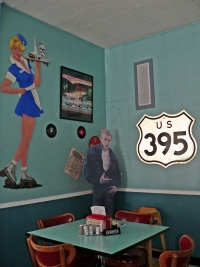 Photo,left: Major's Diner in Pine Valley, a long-time roadside stop for travelers also popular with local residents, could not survive another shut down in winter weather, the owner says.

Places of worship, gyms, restaurants and movie theaters are ordered to stop indoor operations under state mandates due to high rates of COVID-19 that have moved San Diego County into the purple tier.  Retailers are supposed to cut service to 25% capacity and any schools not yet reopened are prohibited from doing so.

Restaurants and bars have been tied to 9.2% of all COVID cases in San Diego County from June 6 through November 7, or 3,666 cases, according to newly released county health data. Even with many modifications, the most recent two weeks of data from October 25 to November 7 show 389 cases tied to restaurants and bars, or 10.01% of total new cases—more than any other specific business category.

Yet some restaurant owners say they’re done with shutdowns and would be unable to survive another shutdown as winter approaches.