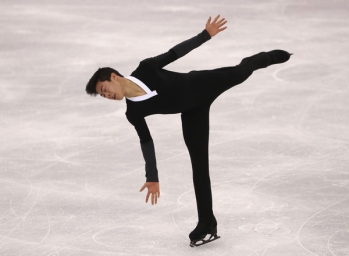 Photo:  Nathan Chen of the United States competes during the Men's Single Free Program on day eight of the PyeongChang 2018 Winter Olympic Games at Gangneung Ice Arena on February 17, 2018 in Gangneung, South Korea.  Via Zimbio

February 17, 2018 (Pyeonchang, South Korea) - America was expecting so much from Nathan Chen.  He let us down the first time.  He didn't let it happen again.

“I definitely did want to redeem myself after the two short programs and I think I did here,” said Chen.  He made it sound like he was redeeming something pointless like a gift certificate, but he redeemed so much more.

The Salt Lake City native's 215.08 points is an American and Olympic record and the highest score in the men's free skate and launched him from 17th to fifth place.

That wasn't all he did.

Chen did his five originally planned quads during his routine, but threw in a sixth.  For revenge.  Five of six of them were clean.

“It was sort of an anger thing,” he said. “I was just like, ‘Oh screw it, I’m going to try it. At this point I have literally nothing to lose. I’ll just go for it. And then I was like, ‘Well I can’t think about that right now. I can’t dwell on it. I’ll readjust in the morning, rethink about it.

“I’m glad I was able to show myself and show everyone else that I can bounce back from a bad performance,” he said. “And honestly, I am human, I make mistakes. Unfortunately I had been having a really bad time. But I’m really happy with what I did here.”

Team USA men's hockey, this Olympics comprised of mostly AHL and college players after the NHL refused to send its players to the Olympics, secured their first win of PyeonChang against Slovakia on Friday. 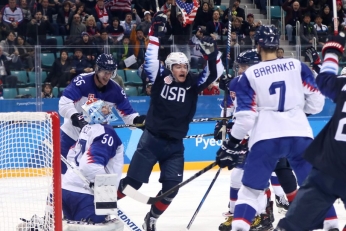 Up next for Team USA is a game against the Olympic Athletes from Russia on Saturday morning at 4:10 a.m.  The game wraps up the preliminary round, in which Team USA is now 1-1; they suffered an upsetting overtime defeat to Slovenia 3-2.