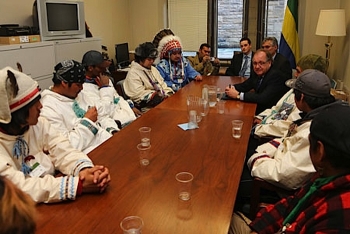 Editor's note: This is a victory born in the Idle No More Movement for Native rights, which has spread from Canada to the U.S. ECM recently covered Idle No More speakers in San Diego, including local Kumeyaay members.

Co-incidence? or a recognition that Canada must satisfy some of the growing demands of its aboriginal peoples.

The Nishiyuu's saga was inspired by the hunger strike of Chief Teresa Spence and in support of the Idle No More movement. Six Aboriginal youths and a guide set out to follow their traditional trade route to Ottawa. The group left the from the Cree community of Great Whale (Whapmagoostui First Nation) in Northern Quebec on January 16. Their journey began by snowshoe in temperatures well below freezing. They set out to bring unity to the First Nations people:

"This Quest-Journey will establish and unite our historical allies and restore our traditional trade routes with the Algonquin, Mohawk and other First Nations. The time for Unity is now." (Mission statement from Nishiyuu website http://nishiyuujourney.ca/#!/?page_id=10) 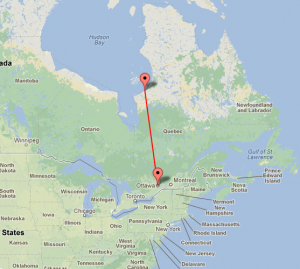 This message of unity was inspired by a vision one of the youths, David Kawapit,18, had of a bear and a wolf. ”I saw a bear going up against a wolf, and a bear can easily kill a wolf when it’s alone, but in my vision the wolf called upon his brothers, the other wolves, and together they took down the bear as one.” A message that together they can stand up to the government for indigenous rights and protection of the land.

The group visited Aboriginal communities and were joined by other walkers along the way. In the end they had gained a group of over 200 walkers according to the CBC news, many joining for the final stretch, and were welcomed by thousands on Parliament Hill in Ottawa, Ontario. Among those to join them along the way was 11 year old Abby Masty, who joined to honor Canada’s missing and murdered Aboriginal women.

Along with the Idle No More movement, the youths also wanted to bring attention to  Aboriginal issues in Canada and the environment. “This land, the earth, the rivers, the winds, the mountains, the clouds and all of the creation, we are the true keepers and will continue to do so until time on earth is over.”

Canadian Prime Minister Stephen Harper did not meet the youths as he was greeting the two pandas sent from China to begin their ten year stay in Canada. His decision prompted one Member of Parliament to ask just how many more kilometers they would need to walk before the Harper Government listens. However, the youths were able to meet with the Minister of Aboriginal Affairs (photo at top of page) , who is to visit their community in the summer.

The youths were given a hero’s welcome, met by crowds of supporters in front of the parliament buildings.  The time began with a visit to Victoria Island, not far from Parliament, where Chief Theresa Spence had camped out during her hunger strike.Chief Spence was among the people there to celebrate the journey. Each of the youths were able to address the crowds about their journey. The celebration ended with a huge round dance on the Parliament lawn.

Idle No More is a grassroots a movement for indigenous rights and the environment that began in Canada in November and soon spread across the United States and the world, including a group in San Diego.

As Whapmagoostui First Nation Chief Stan George said in a Jan.16 press release: “They left as young men to carry the heaviness and emptiness that surrounds us all, but they will return home as Great Men, our Warriors!”

(Image Credit: Minister Valcourt met with and listened to priorities of First Nation youth from Northern Quebec, focusing on the shared objective of improving their communities and opportunities.- Aboriginal Affairs and Northern Development Canada)

For more information on the Idle No More movement see: