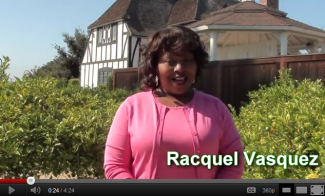 Recipient of the President’s Volunteer Service Award in 2010, she also has a strong track record of public service with the cities of Lemon Grove and San Diego as well as the U.S. Navy. Her platform includes three goals: improving public safety for residents and businesses by creating a safe and walkable community, creating quality neighborhoods, and fostering economic development to help businesses thrive.

Vasquez has served as a planning commission since 2007 and also served on the city’s budget focus group.  A Navy wife for 18 years, she has lived in Lemon Grove for the past 10 years and has raised her family her.

Also an active community volunteer with experience in programs ranging from the San Diego Civic Youth Ballet Company to Soroptomists International of Lemon Grove, she has received numerous honors for her volunteerism and public service. Awards include the Award of Merit 2011 from the American Public works Association, the President’s Volunteer Service Award 2010 from the President’s Council on Service and Civic Participation, and the 2011 Mark of Excellence Silver Bernay’s Award in Public Service from the Public Relations Society of America.

She also wants to bring back the city’s Parks and Recreation Department, which the Council voted to eliminate earlier this year due to a budget crunch.  “Eliminating Parks and Recreation for our city was a huge loss,” she asys. “I hope that we will revisit bringing back those services sometime in the future.”

Asked about downtown redevelopment, she responded, “Wow, redevelopment for our city is huge. In fact, the business community is essentially in assuring that our community thrives. That’s where our tax revenues are generated and that money supports our schools.”

She hopes to see a combination of restoring older buildings and some new construction in the downtown business district to attract shoppers both during the daytime and in the evening.

“With those types of changes, new businesses may want to open and residents not only here in Lemon Grove may want to shop, but also outlying cities.”

Vasquez is the first to declare her candidacy for the Lemon Grove Council race in 2012.

For more information on her campaign, view our video and visit www.electracquel.com