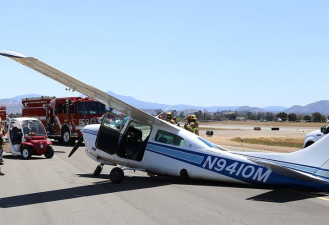 June 1, 2018 (Ramona) – Cal Fire’s incident commander in Ramona reports an aircraft down at the Ramona airport.

An initial report indicated one patient had minor injuries, but the patient was released after evaluation at the scene.

No information on cause of the crash has yet been released.

A photo provided by Cal Fire, credited to Kevin Pack, shows the letters and numbers N9410M on the tail.  The 1970 fixed-wing Cessna is listed at FlightAware as registered to Steven F. Davenport of Peralta, New Mexico.