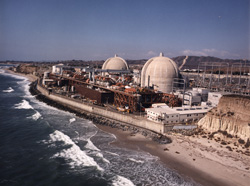 June 9, 2013 (San Diego’s East County) – As ECM reported on June 7, the San  Onofre Nuclear Generating Stations  (SONGS) will be shut down permanently.  Reactions locally range from celebration among activists pushing for the closure to concerns over stored nuclear fuel, job losses, and a new bill that could ramp up pressure for approval of other energy projects including large-scale wind and solar projects in East County.

“The closure of the San Onofre Nuclear Power Plant is terrific news for San Diegans and for our environment.  We must continue to push for clean, safe energy locally and worldwide,” the Sierra Club’s San Diego Chapter stated in a press release.

The Sierra Club noted that  energy issues have been at the forefront recently following failed attempts by SDG&E to gain approval for two fossil fuel-powered plants, including Quail Brush near Mission Trails Regional Park.

San Diego County leads the nation with 23,000 rooftop solar systems on homes, businesses and schools, which have helped reduce demand on the grid and prevent blackouts.

“We hope, especially, that the utilities will take this opportunity to help get more locally generated renewable energy, such as rooftop solar, into their portfolios,” said Kathryn Phillips, Director of Sierra Club California.

A bill introduced in the Legislature, AB 177, would mandate that utilities produce 51% of power from renewable energy sources by 2030.  Some fear that will increase pressure to build more industrial-scale wind and solar projects including locally in San Diego and Imperial Counties.  Foes contend that our region’s power needs would be better met by rooftop and parking lot solar.

“I am very afraid that by closing San Onofre, coupled with this new request, if passed there will be a mass future public desert land grab to accommodate these projects,” said Ocotillo resident Parke Ewing, whose home is now surrounded by 500-foot-tall wind turbines on public lands.

“It seems evident that huge energy companies are buying their way  [through the legislative process] through lobbyists and the promise of money,” Ewing added. “Instead of promoting production tax credits our government should be promoting free enterprise and offering a reward for new technologies in electrical generation and electrical conservation. Wind energy in beautiful California is a losing deal for our future.”

Engineer Bill Powers  testified as an expert witness before the PUC in the power plant proceedings. “SDG&E has excess power generation reserves without San Onofre,”  he now observes. “SDG&E is required to maintain some reserve supplies to assure grid reliability at peak demand. The requirement is 15 to 17 percent. SDG&E had reserves of about 24 percent during the hottest hour of the yare on September 14, 2012 without San Onofre. Moreover, nearly 2,000 megawatts of new gas-fired capacity that can be shared with SDG&E’s  territory will be added by August 1, 2013 in the L.A. basin.”

Ray Lutz of El Cajon, founder of the watchdog group Citizens Oversight, called it a “happy, happy day” when the shut-down announcement occurred, Fox 5 TV reported. Lutz has been a leading voice calling for the shutdown due to serious safety concerns following radioactive steam leaks and revelations that Southern California Edison was aware of problems with the equipment used.

Donna Gilmore, an activist who operates the anti-nuclear site sanonofresafety.org, said the waste issue was her biggest concern, the San Clemente Times reported.

Tom Lemmon, Business Manager at the San Diego County Building & Construction Trades Council, said the closure announcement “sadly comes at a great cost to workers and personnel…Many workers such as myself launched our careers due to the demand for apprentices that spread well beyond SONGS and throughout Southern California, as the need for skilled labor increased at SONGS some 40 years ago.”

The closure will result in loss of about 1100 jobs.  “These jobs held by its highly trained workforce will be difficult to replace,” said Lemmon, who voiced hope that repowering of gas-fired plants at Encina and a proposed plant in Otay “will get underway soon and without opposition.”

He added words of reassurance to the community on one key point: “The trades commit to a safe decommissioning of SONGS.”