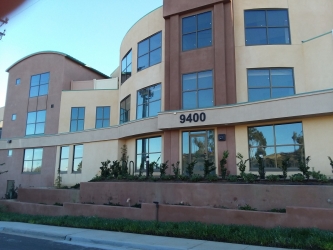 Update December 20, 2018:  The State has sent a letter to La Mesa's city manager advising that it has dropped plans for a parole office at this location, at this time, but will seek an alternative site elsewhere in East County.

December 19, 2018 (La Mesa) -- The Grossmont-Mt. Helix Improvement Association (GMIA), along with the greater community, continues to gather information to oppose the leasing of a building by the Department of Corrections for a Parole Operations Center amidst of their residential community. GMIA and the greater community have sought help from elected state officials, who are aware of the community plea to stop the parole office but have yet to provide substantive action.

Supervisor Dianne Jacob, who has no jurisdiction over the matter, early-on publicly stated her opposition, and has shared new information which came into her office.  Previously, the Department of Corrections stated there would be 52 Parole Agents at the 9400 Grossmont Summit Drive property.  It was shared with Supervisor Jacob’s office that one of the units that would be operating out of that facility is the East San Diego GPS unit.  She has advised that a source, that appears to be legitimate, shared this information and has asked to remain anonymous.  This credible source has provided the following information regarding the East San Diego GPS Unit.

“This is a unit with approximately ten Parole Agents each carrying a minimum of 25 sex offenders monitored using GPS.  A high proportion of those sex offenders are classified as enhanced out patient, (EOP) which is the highest category of mentally ill offenders.  Of that population a great deal of them get paroled from Atascadero State Hospital where they were placed due to there [sic] mental illness and sexual deviancy and assaultive behavior.  They are provided with monthly transit passes for them to be able to go to mandatory sex offender therapy and make their appointments at the parole office.  They would be getting on and off at the same trolley stop as students at Grossmont High School and Parkway Middle.

The other units that would be stationed out of the proposed building monitor a regular caseload of parolees.  These cases are not the type of cases San Diego Probation handles.  These are all hard core individuals who have served a considerable amount of prison time for offenses ranging from murder, carjacking, kidnapping, narcotics and assaultive behavior.  This would include three caseloads of "lifers", parolees who have served between 20 to 40 years for murder. All comingling with students from Grossmont and Parkway at the trolley.”

Residents opposed to the project have launched a petition online at : https://www.change.org/p/stop-adult-parole-operations-from-opening-in-mt-helix-la-mesa?fbclid=IwAR2yU7mFIYasnGbNDD9gzlGxJxYTUP6A1Gkm9icKVfn-I-tw2ErTiHdreuM

A Stop Parole Office on Mt. Helix Facebook group has also been set up at https://www.facebook.com/groups/stopparoleoffice/?inviter_id=143900243&is_new_user=0

You can also call or send emails voicing concerns to:

For more information, updates and a list of action items, residents can visit the Mount Helix Next Door site at https://nextdoor.com/news_feed/?post=98136868