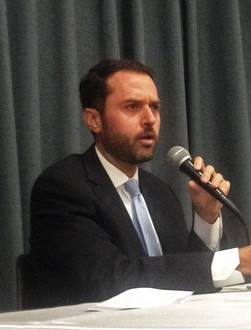 October 29, 2020 (La Mesa) -- Over the past four years, it has become apparent that the citizens of La Mesa can not trust Colin Parent to do what is in the community's best interest, and only what’s in his personal or donor’s best interests.

Two recent examples of Colin putting his own career over the will of his constituents would be the ADU vote in 2019, when despite overwhelming public opinion for more time and discussion before changing the laws to the most lenient in the state, Colin Parent argued for an immediate vote, inviting pro-ADU spokespeople to come out and speak against community members and even failed to acknowledge a campaign by an ADU promotion company to sabotage the community survey, a company later found to be one of Colin’s campaign donors and he has subsequently posted links to their website on his Twitter several times. After using a procedural maneuver to cut short council discussion of the proposal,  Colin pushed the ADU proposal through on a 3-2 vote, and since then has used it as a career talking point and called citizens against “racists."

A more recent example of this pattern would be the Holiday Inn Homekey Homeless Housing Proposal. The proposal was brought to the county by Affirmed Housing, a developer with a history of contributing to candidates for political favors and a corporate sponsor of Circulate San Diego, the nonprofit lobbying group run by Parent. The proposal requested to receive a $37 million dollar grant from the state and county to convert the Holiday Inn Hotel on Fletcher Parkway into permanent homeless housing for the unhoused from throughout all of East Country.

Colin Parent was notified of Affirmed Housing’s plans, via a LinkedIn message from its CEO directly to Colin on August 12th.  Now one would think a council member's first response would be to find out more details about the project and investigate its feasibility with the City Manager and City Staff. Instead, after hearing the details about the project only from the developer, Colin immediately wrote the County a letter of support for the project, saying that it perfectly aligned with the City’s goals and would “go a long way towards helping the council’s priorities” without first speaking with the mayor, the city staff, other council members, or the public.  The timeline from this point until the special council meeting on Sept. 21, as evidenced by emails gathered through public records requests, shows a very different tact taken by Colin Parent as opposed to the Mayor, City Manager or other council members.

The City Manager was busy gathering facts, opinions, and recommendations from various city departments, and the county, eventually coming back with a recommendation to the Mayor and council that they do not support this project for various reasons.

While during this time period, the Mayor was busy working on a strategy to slow the county vote for approval of this project until the community had a chance to weigh in.

Meanwhile, Colin Parent, on his own accord, was meeting with the developer on numerous occasions, lobbying the board of supervisors for support, rounding up supporters to speak in favor of the project, and even going so far as to give out the contact information of private citizens he thought would be favorable to the project directly to the developers. Much of this after the City Manager had already given the council the staff’s recommendations against the project and the Mayor expressed dissatisfaction at the lack of community input.

Eventually, Colin Parent recused himself from the special counsel vote (though he argued to the city attorney that he should not have to) when La Mesa Village Voice exposed his ties to the developer, including a $1000 donation from Affirmed Housing’s CEO just days after Colin wrote the County in support of the project. After hearing overwhelming public input against the details of the projects, and the recommendation from the City Manager against the location the council, minus Colin Parent, unanimously voted against supporting the project. At the Board of Supervisors meeting the following day the developer’s request was denied following La Mesa’s input; the Supervisors voted to withdraw a state grant application for the project.

This is a pattern of behavior of doing things purposefully without transparency. Combine this with findings from his campaign finance docs that showed between 2016 and 2020 he took in close to $200,000 of special interest money, mostly from developers and building industry insiders and less than $3000 from regular La Mesa residents, plus the fact that he has voted on several projects involving his campaign donors without recusing himself makes this a candidate we can not trust to do what is in our best interest.

Do we want to spend the next four years wondering if Colin Parent is making a decision based on what’s best for La Mesa, or what’s best for his donors and his career? The answer is a clear “no.”

We must vote out Councilman Parent. Vote for Kristine Alessio and Laura Lothian!
If you're reading this you're "in-the-know" about local politics. Please email your friends and neighbors who are not this link.