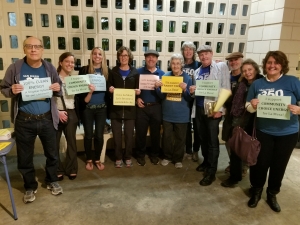 The SanDiego350 CAP campaign began with the release of the first draft in early 2015 when we attended the meeting of the Environmental Sustainability Commission. Along with Climate Action Campaign (CAC), we identified numerous deficiencies in the Plan - it lacked a goal of 100% clean energy and didn’t identify Community Choice Energy (CCE) as a strategy. In addition, the time frame of 2020 was too short, too many measures were identified as voluntary, and, for the most part, the plan was not enforceable.

When a public hearing on the draft CAP was held before the Planning Commission in June 2015, SD350 volunteers showed up in force. Many of us spoke and submitted written comments addressing the CAP’s deficiencies. We began our presentation with Margaret Meade’s inspirational words: "Never doubt that a small group of thoughtful, committed citizens can change the world; indeed, it's the only thing that ever has.”

After all the speakers had voiced their concerns, the commissioners voted unanimously in favor of having staff consider the points we had raised. In closing, Commissioner Jim Newland praised the speakers for their participation in the democratic process. If we and Climate Action Campaign hadn't shown up at that Planning Commission Public Hearing and made our voices heard, the inadequate draft Climate Action Plan would likely have been adopted at the subsequent City Council Meeting.

After that initial Public Hearing, we kept in touch with the City Manager and Community Development Director. Through meetings with the Mayor and City Council members and input at many City Council, Environmental Sustainability Commission and Planning Commission meetings, we encouraged the City to do more public outreach on the draft CAP and to hold workshops on Community Choice Energy. We enlisted the local Sierra Club chapter and the La Mesa Foothills Democratic Club who encouraged participation by their La Mesa members too.

All this work paid off. It helped spur the City to conduct extensive outreach - including at the “Connect La Mesa” block party in November 2015, a Climate Action Plan workshop in August 2016 and three public workshops on Community Choice Energy. We also supported a panel on Community Choice Energy put on by the local group “La Mesa Conversations."

Our volunteers played a significant role in helping spread the word and organize participation in these outreach events. This involved putting up posters and handing out flyers in La Mesa in advance of the events. Also, to promote community support for CCE, we initiated a “I support Community Choice” postcard campaign. These postcards were distributed to residents at various community events, collected, and then submitted to the City Council.

We worked closely with staff at Climate Action Campaign to review the iterations of the draft CAP. (The Plan that was adopted was the third draft.) We also reached out to local media to ensure good coverage of progress on the CAP. Our volunteers wrote articles on the CAP which we were able to get published in local outlets - such as “La Mesans Call for Effective Climate Action Plan," published in East County Magazine.

We are proud that our efforts resulted in the City undertaking a more in-depth review of the CAP and making significant improvements to it based on our recommendations. In fact, two Council members were selected to serve on a CAP subcommittee - signifying the City Council’s commitment now and in the future. When the November 2016 Council election rolled around, we made the CAP an issue, asking questions about candidates’ stances on the CAP at multiple candidate forums.

Volunteer Roxanne Schwabe, one of the almost 30 SanDiego350 volunteers who attended the March 13th City Council meeting where the CAP was adopted and where many of us spoke (some for the first time) remarked "It was so great to see such a great turnout of our SD350 friends!  All of our speakers conveyed their compelling presentations with so much heart and presence and the Council members' genuine respect for your contributions over these years was obvious."

Indeed, we’ve had a wide range of our La Mesa volunteers contribute to this effort over the past three years, including Hannah Carney, an SDSU student, Jean Costa, a retired Helix High School teacher, Brittany Gardner, a recent SDSU graduate and museum curator, Dr. Jeanne Peterson a psychologist and mother of two, Gabriel Romero, a young man who works in marketing - and many others. 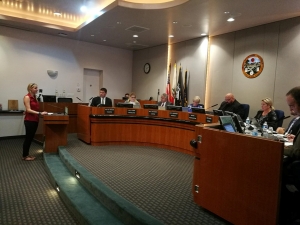 Due in large part to the persistent efforts of SanDiego350 volunteers, La Mesa has a pretty great CAP that includes a commitment to 100% clean energy, the adoption of Community Choice Energy as a potential strategy for reaching the clean energy goal and a timeline that goes out to 2035 - helping ensure the City does the long term planning that is necessary to achieve reductions in greenhouse gas emissions.

Does the CAP still have room for improvement? Yes, and SanDiego350 volunteers and our allies will continue our advocacy so that the City develops an implementation plan without delay and adds aggressive transportation mode share goals for walking, bicycling and transit and includes climate justice considerations at the first CAP update.

If we’ve learned anything over the past three years, it’s that showing up and speaking out makes a difference! And we’ll continue to do so to safeguard our children’s future from worsening wildfires, prolonged drought and other devastating effects of climate change that we're already seeing in California.

The views in this editorial reflect the opinions of the author and do not necessarily reflect the views of East County Magazine. To submit an editorial for consideration, contact editor@eastcountymagazine.org.