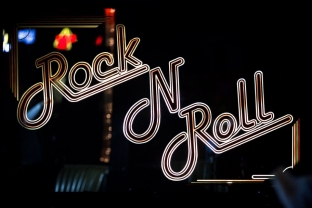 Maybe the Rock & Roll Hall of Fame should be renamed. Many great musicians from past years are not really categorized as rock & roll. Maybe call it the Modern Music Hall of Fame. Dolly Parton made this comment a few weeks ago, she said in a tweet. “Dolly here! Even though I am extremely flattered and grateful to be nominated for the Rock & Roll Hall of Fame, I don't feel that I have earned that right. I really do not want votes to be split because of me, so I must respectfully bow out. I do hope that the Rock & Roll Hall of Fame will understand and be willing to consider me again - if I'm ever worthy. This has, however, inspired me to put out a hopefully great rock 'n' roll album at some point in the future, which I have always wanted to do! My husband is a total rock 'n' roll freak and has always encouraged me to do one. I wish all of the nominee’s good luck and thank you again for the compliment. Rock on!”

Is rock ‘n’ roll dead? I’m cautious about saying things like, “music was so much better back in the day than it is today” because I undoubtedly sound like some old dude way past his prime. So, depending on whom I’m taking with I’ll say, “Music today is different than it was back in the day.” But my REAL feelings? Today’s music isn’t as good as the music of the ‘60s, ‘70s, ‘80s and grunge rock of the 90’s.

As a teenager in the 1970’s I enjoyed everything from Led Zeppelin to Cat Stevens. Rock ‘n’ roll was a part of our lives, from going to concerts, playing albums, to listening on the radio. I saw a lot of great rock ‘n’ roll groups live at the sports arena here in San Diego. I saw Led Zeppelin, Pink Floyd, David Bowie, to name a few and some lesser-known bands as well. I saw Sly and The Family Stone, Johnny Winter, Uriah Heep. As a teenager I couldn’t go to all the great concerts as tickets were expensive for us at the time. I remember tickets being anywhere from $6.00 to $9.00 and wondering every time as teenagers how are we going to get the money for that concert? Most of the time it was open seating and you showed up at the concert many hours before the doors opened to get a good seat and we thought that was great.

I think my opinion is right about today’s music. Music is an art form, which is shared by individuals and groups of people. If there were not people feeling the groove and gettin’ jiggy with today’s music, it would change. So, music changes and evolves to suit the generation that is listening, and I get that. But again, is it better?

Songs now average a little over 3 minutes and are steadily shrinking. Songs of the past had to make radio time and couldn’t play too long, but bands and musicians always had a song that played longer than the rest – part of the variety of bands from the past. The classic Stairway to Heaven being 7 minutes 55 seconds is a song that radio stations wouldn’t play at first because it was too long, but then came around because of the demand for the song. The song by The Doors “The End” plays 11 minutes 43 seconds. Iron Butterfly “In-A-Gadda-Da-Vida” plays 17 minutes 5 seconds, and it took up one side of the album.

Rock ‘n’ Roll started in the 50’s and evolved over 4 plus decades.  So, is Rock ‘n’ Roll dead? All top music artists of today have talents and they have their fans that love them. Again, it’s different and I’m an old man. But is anyone playing instruments anymore? It seems most of today’s music is being played with electronic computer devices instead of guitars, drums, keyboards. Gone are the drum and guitar solos. Yes, there are some artists who use instruments, but the depth and extent of which they play them is much less. All performers want to succeed, but it seems to me that the performers of today are playing more for the reason of success and monetary reason instead of the reason being the music they love. That to me seems why music was much more diversified in days gone by.

I’ve got some music playing on Alexa right now and it sounds pretty good. I was thinking, should I go with Taylor Swift, Harry Styles, or the Rolling Stones? Which one do you think I went with?