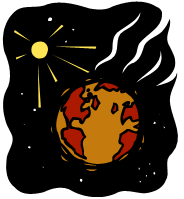 August 9, 2013 (San Diego’s East County) – There is an unprecedented human drama unfolding in Africa that should stop every one of us in our tracks.  It is a vision into humanity's future, where we are heading and how we will exist throughout the remainder of this century.  This is about choices, by all of us and where those decisions will lead us.

Changing weather patterns are creating severe drought and flooding everywhere, but for Africa it has been even worse.  Returning from a missionary trip to Kenya, a relative last week gave me first hand accounts of the suffering she witnessed.  The horror she saw was not just the deaths by starvation of these poor people, but the decisions they were forced to make.  Unable to bear the pain and suffering of their dying babies, she saw young mothers resorting to making them high on a glue paste to make them oblivious to starvation.  That image, of a young mother with a dying baby on one hand and a handful of glue paste in the other, haunted her and it creates a compelling reason for all of us to take action now to mitigate this looming catastrophe.

With a little research I found that sniffing glue is not an uncommon way to deal with the pain of hunger, especially among orphaned kids in third world countries.  It is not surprising that young mothers would turn to it when all else fails, as an act of mercy and an escape from a child's cries.  In America's privileged economy we can avoid the suffering in these third world countries by simply looking the other way.  We can ignore how climate change is exacerbating world hunger or we can try to do something now, before it collapses into a bigger and more permanent problem for all of us.

The sheer numbers of worldwide organizations involved in climate research and global hunger is staggering.  More importantly, they are reaching similar conclusions.  Just a few months ago, the  Consultative Group on International Agricultural Research (CGIAR) met in Ireland to discuss how to feed the nine billion people expected to be alive in 2050.  They concluded that millions of people will face starvation in Africa and Asia as staple foods are expected to more than double in price by 2050 as a result of extreme temperatures, floods and droughts that will transform the way the world farms.  They found that food insecurity risks due to climate change will turn parts of Africa into permanent disaster areas.   Other organizations like the World Bank report similar findings.  In a recent report, they said climate change in parts of Africa will result in a loss of 40 to 80 percent of cropland and that it will evolve into a global crisis.

There aren't many solutions to our climate problem offered by these organizations, other than to reduce our carbon dioxide (CO2) output and other greenhouse gases.  We know they trap heat and causes global warming, creating extreme weather events because of polar jet displacement, that in turn creates massive flooding and droughts.  It produces a host of other problems but we seem to be at an impasse as to how to deal with it.  Other than arresting world deforestation, we have little capacity to impact naturally occurring CO2 and our only viable option seems to be reducing the CO2 we produce through burning fossil fuels.  That option, however, is stymied by political divisiveness.  House leadership in Congress refuses to consider any ideas on limiting our use of fossil fuels.   They argue that such an action will cost us jobs and that even if we did, the rest of the world can't or won't take actions to limit the burning of fossil fuels because it will limit their industrial growth.

Our political bickering over this problem is a deadly and failed opportunity to lead.  The world will listen.  There are plenty of economists who say new renewables will create a new generation of jobs for America.  There are hundreds of other ideas, such as revenue neutral carbon taxes and fourth generation nuclear reactors.  Fossil fuel corporations may not want it but the world is beginning to recognize our problem and we need to show American leadership in a crisis like this and not American political gridlock.

Humanity is at a crossroads and we need to make the right choices to ensure we survive as a whole and not as pockets of privileged nations.  Despite our differences we all share the inimitable empathy of being human and that will hopefully become our moral trigger for action on climate change and world hunger.

Excellent account of the horrors we are now facing for allowing the fossil fuel conglomerates to run havoc on our Planet. Money speaks and the buyout of our World leaders and politicians is so evident. But, with any movement...Civil/Women's/Gay Rights, to name a few, the many can outrun the Money. It's past time to stand up and take our Environment back. For if we don't do that now, these horrors will continue to escalate....see the current fire on San Jacinto Mtn as an example. Welcome to Global Warming, everyone. In the least, you can take a few minutes to write to your local, State, and Federal politicians and tell them not to support fossil fuel companies but to increase funding towards renewable energy projects. What are you going to do about this? The Balls in YOUR court and it's up to you to step up to the plate and say enough is enough!!