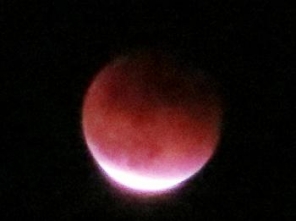 September 28, 2015 (El Cajon) – Robert Gehr shot this image of a rare “Super Moon” combined with a blood moon and lunar eclipse last night over El Cajon. A Super Moon occurs when the moon is at its perigee, the closest point in orbit to earth, making it appear larger.   The eclipse is caused by the earth between the sun and moon, casting a shadow on the moon. The red  hue is due to sunbeams that slip around the sides of the shadow, creating sunset colors in rust and red.