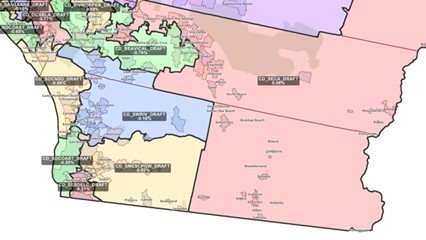 Some East County leaders have voiced concerned over certain proposed maps that if approved, could divide East County, lumping communities such as Lakeside in with coastal areas and some places in with communities in other counties. Opponents include the Lakeside Chamber Commerce, which supports alternative maps.

The stated intent, per the law, is to focus on trying to keep communities together based on factors including shared cultural, ethnic, geographic or economic concerns, voting rights and more.  All districts must be approximately equal in populations, be contiguous with compact shapes to avoid gerrymandering and try to keep cities, towns and communities together. 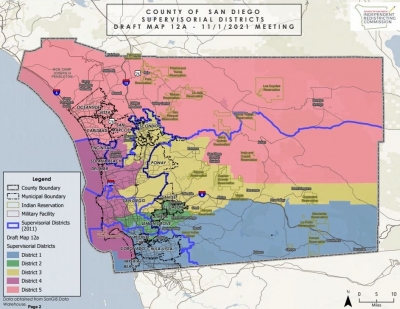 Photo, right: One of several proposed maps of County Supervisorial districts, this would give East County three Supervisors instead of two with portions of East County in their districts, but critics fear dense urban areas would command more clout within those districts.

The most vocal concerns have been raised over proposed changes to Supervisorial Districts.  Currently all of East County is represented by two Supervisors, Joel Anderson and Jim Desmond.  The County’s nonpartisan redistricting commission has proposed several draft maps, some of which encompass coastal communities along with East County and one that would divide East County into three districts each combined with urban or coastal areas – a move that some fear would weaken the influence of voters in rural, mountain and desert areas as well as communities such as Santee and Lakeside. Some would take cities such as La Mesa, El Cajon and Lemon Grove out of East County representation and shift them into a densely packed urban district.

There are three additional meetings planned on the maps before approval is required Dec. 14. The next meeting is Saturday, Nov. 13 at 11 a.m.

On November 10, the California Citizens Redistricting Commission released its draft maps for Congressional districts , which must be certified by December 27.

The state must lose one district due to a population decline, but San Diego will keep five Congressional districts. However the boundaries would shift substantially in some; the new maps don’t even list district numbers.

Three districts proposed would border Mexico, including a district in East County, a more central district and a coastal district.  A fourth district in North County would stretch from Poway east through Ramona and Julian and north into Riverside County. The fifth district would include San Diego County’s north coastal region from Solana Beach north to Laguna Nigel in Orange County.

The commission proposes to provide just one huge district for most of East County including the unincorporated areas and the city of Santee.

La Mesa, Lemon Grove and El Cajon would be shifted into one of four districts in the county’s center, an apparent effort to combine communities with high numbers of immigrants and refugees into a single district.  There would also be two coastal districts, north and south.

The proposed State Senate map would also divide East County. One district would stretch from Santee and El Cajon westward to the waterfront downtown.  Another would cover most of East County and South County, as well as parts of Riverside County and Imperial County east to the Salton Sea, substantially weakened East County voices potentially.

A third district would stretch from central San Diego through inland North County, while the fourth would run along the coast from La Jolla north to Laguna Nigel in Orange County.

The commission approved the Congressional and state legislative map drafts this week, but the public still has two weeks to submit comments at https://www.wedrawthelinesca.org/contact or during virtual meetings coming up.

You can view draft state legislative and Congressional district maps at https://www.wedrawthelinesca.org/draft_maps?utm_campaign=draft_maps&utm_medium=email&utm_source=ccrc.

Current districts, from the San Diego Registrar of Voters:

The County Board of Supervisors map proposed here has three rural districts, the northern one with Oceanside, central with the urban rural areas of Poway etc., southern one includes Chula Vista and border community, the two urban ones- one wealthy one, one not so wealthy. Very nice.