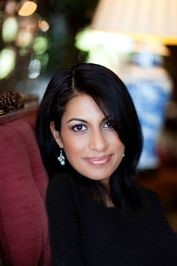 April 7, 2022 (El Cajon) -- Shilpi Somaya Gowda is the featured author for the La Mesa-El Cajon Branch of the American Association of University Women’s annual Author’s Luncheon fundraiser. The event is open to the public and will be held at Sycuan Casino Resort, 5469 Casino Way, El Cajon, CA on May 21 beginning at 11:00 a.m.

Shilpi Somaya Gowda is the award-winning, New York Times and internationally bestselling Canadian author of Secret Daughter, The Golden Son, and The Shape of Family. Gowda was born and raised in Toronto, Canada. In college, she spent a summer as a volunteer in an Indian orphanage, which seeded the idea for her first novel, Secret Daughter, published in 2010. It was a New York Times and #1 international bestseller and was translated into over 30 languages.

Her second novel, The Golden Son, was published in 2015 around the world, was a #1 international bestseller, a Target Book Club Pick, a Costco Buyer’s Pick, and was awarded the French literary prize, Prix des Lyceens Folio. Her third novel, The Shape of Family, was published in 2019. It was on the Canadian national bestseller list for several months, then debuted at #2 on the LA Times bestseller list.  Her novels have sold over two million copies internationally.

Shilpi holds an MBA from Stanford University, and a bachelor’s degree in Economics from the University of North Carolina at Chapel Hill, where she was a Morehead-Cain scholar. She has served on the Advisory Board of the Children's Defense Fund, and is a Patron of Childhaven International, the organization for which she volunteered in India. She lives in Southern California with her husband and children.

All proceeds from the event are used to provide scholarships to college women, middle school Tech Trek STEM Camp registration fees, and prizes for the First Female essay contest for Grossmont Union High School District students. In 2021, six, $2000 scholarships, were awarded to women in the Grossmont-Cuyamaca Community colleges. The branch also sent ten campers to the Tech Trek virtual camps this past year.

Registration forms for the luncheon, which costs $70.00 per person,  are available from branch members, and online at https://lamesaelcajon-ca.aauw.net. In addition to the speaker there will be a basket raffle, silent auction and online auction running from May 7-22. For additional information contact Sherry Butler (808-294-4267) or Yolanda Emery (619-846-8037) event co-chairs. Donations for the auctions and raffle are still being accepted.

New members are always welcomed and do not need to be invited to attend a meeting.

La Mesa-El Cajon Branch of American Association of University Women (AAUW) has been engaged in “equity for all” efforts since the 1950’s and is one of the largest branches in the state. For more information about this organization, go to www.lamesaelcajon-ca.aauw.net.