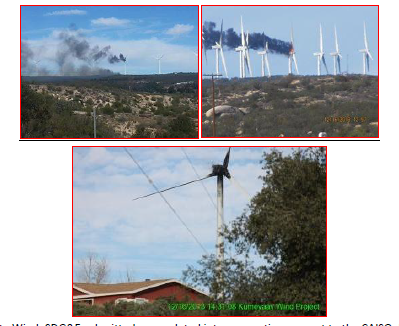 Photos, left:  Campo Wind's turbines hae been fire-prone, causing multiple fires in the past. Residents worry that more turbines raise the risk of a catastrophic fire, if a blaze should begin during Santa Ana gusty winds.

February 5, 2021 (San Diego’s East County) – A vote by County Supervisors on a Renewable Energy Overlay plan has been postponed until Wednesday, Feb. 10. If approved, the measure would designate vast swaths of rural East County for industrial-scale wind and solar energy projects.

The aim is to make it easier to get approval of projects that provide clean energy to meet state renewable energy mandates amid a climate crisis.  But the measure has also drawn strong opposition from some rural residents, including Donna Tisdale, who advise East County residents to contact Supervisors to voice opposition so that “Supervisors know how East County really feels about being thrown under the bus as a renewable energy sacrifice zone.”

Click on this link to register your  opinion with Supervisors on the Renewable Energy Overlay before the Feb. 10 hearing, which begins at 9 a.m.  The item is the second item on the agenda.

Tisdale is Chair of the Boulevard Planning Group and founder of Backcountry Against Dumps, a nonprofit that has sued the County over several major energy projects in the region. Residents living near existing wind turbines have complained of noise, sleep disruption and other health problems, flashing lights, visual blight from towers hundreds of feet tall, killing of birds, safety concerns from blades whirling off,loss of rural character and loss of property value for homes nearby. Solar projects have generated concerns over glare, loss of wildlife habitat and potential depletion of scarce groundwater for construction and cleaning of panels.

February 18, 2017 (San Diego’s East County) – San Diego Supervisors have rejected plans for a renewable energy overlay zone feasibility study, which would have cost an estimated half million dollars. The action came during a hearing on a Comprehensive Renewable Energy Plan.

Donna Tisdale, Chair of the Boulevard Planning Group and founder of Backcountry Against Dumps (BAD), voiced relief at the Supervisors’ rejection of the overlay zone.  “A renewable energy overlay zone would fast track any projects located within the designated boundaries. Based on some previous information, we had concerns that a renewable energy overlay zone would be placed over the Boulevard Planning Area and/or the Jacumba Planning Area,” she told ECM.