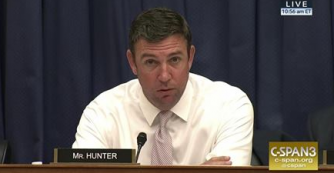 May 3, 2017 (San Diego) – During a Congressional hearing yesterday, Congressman Duncan Hunter (R-Alpine) grilled airline executives over monopolistic practices and lack of competition in hub markets. Hunter noted that he flies regularly from San Diego to Washington D.C. but that United is the only airline offering direct flights.

Executives for multiple airlines including United, American Airlines and Southwest answered questions posed by Hunter, at the hearing aired on CSPAN.  At some hub cities such as Dallas, a single airline controls 60% or more of flights, airline executives admitted.

The scrutiny comes after United received adverse publicity for having Chicago police forcibly remove a doctor who refused to give up his paid seat to accommodate airline personnel on a full flight.  United has also faced scrutiny for a high number of pets that have died in transit and for denying boarding to a passenger wearing leggings.

Hunter posted the terse exchange on his Facebook page yesterday with a note reading, “My [very candid] conversation with the airline CEOs today.”