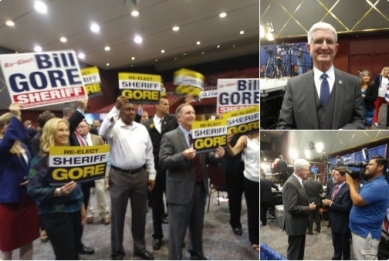 June 6, 2018 (San Diego) – It was a strong night for Republicans running countywide in San Diego yesterday. The GOP swept all four countywide seats on the ballot June 5, 2018.

Sheriff Bill Gore was busy going from interview to interview, flanked by supporters, as the results came in with Gore in the lead.

Sheriff Gore had earlier sat down with East County Magazine, and made a strong case for reelection. His answers accounted for opinions on both sides of any number of hot button issues, and Gore was especially knowledgeable at the FBI, having worked there previously in very high profile positions. Listen here. www.eastcountymagazine.org/hear-our-interview-sheriff-bill-gore-makes-case-reelection.

His opponent, commander Dave Myers, a challenger calling for reforms within the department, had backing from the Democratic party on the left as well as gun owners on the right over concealed carry policies. Myers also did an interview previously with ECM:  http://www.eastcountymagazine.org/hear-our-interview-dave-myers-commande.... 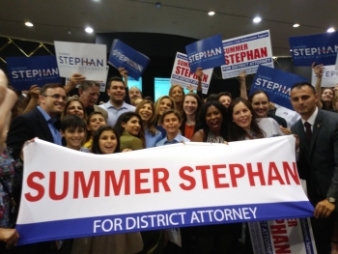 With 100% of precincts reported but not late mail-in or provisional ballots, Sheriff Gore has 56.36% of the vote over Dave Meyers at 43.43%.

District Attorney Summer Stephan had probably the most supporters at Golden Hall, yet was humble and respectful of those who voted for her opponent.

Ahead with nearly two-thirds of the vote (63.7%) versus Genevieve Jones-Wright with a little over a third (36.17%), Stephan told East County Magazine, “I'm honored with what looks like the community's support and trust with their vote. I'm going to wait until all the votes are counted, but looking very hopeful.”

Despite all the money spent on the race, Stephan’ margin of victory was decisive. In the worst light, detractors cast Jones-Wright as the anti law enforcement candidate while the San Diego Free Press called vo 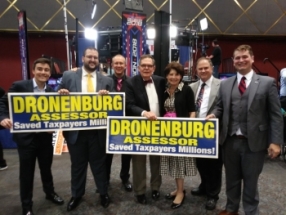 ting for Gore and Stephan “an endorsement of police brutality.”

County Assessor/Recorder/Clerk Ernie Dronenburg, who questioned the validity of the state Supreme Court's jurisdiction to approve gay marriages but ultimately complied with the law, had a very comfortable margin, with 63.5%  to Matt Strabone earning 36.3%. Dronenberg also reduced taxes on 310,000 homes and implemented technology to bring many records online, actions popular with many voters. 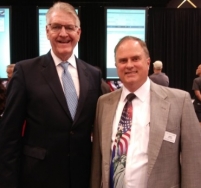 Dronenburg was cheerful, telling East County Magazine, “This has been a great election. The voters have decided that experience is the most important thing and rewarded my hard work with four more years.”

El Cajon Councilman Gary Kendrick, who has worked for the Assessor, Kendrick posed for a photo with San Diego County Treasurer/Tax Collector Dan McAllister, who had 99% of the vote, running unopposed.

It appears our tax collector is the most popular one of all, in a Republican sweep of all four San Diego countywide public offices on yesterday's ballot.