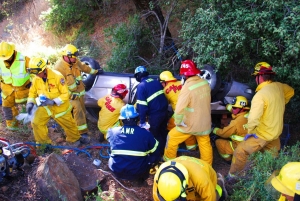 July 17, 2009 (Pine Valley) – A car plunged off eastbound I-8 one mile west of the Pine Valley bridge, rolling 200 feet over the side late this afternoon.  The accident trapped inside the four-door, champagne-colored vehicle.

“An off duty CAL FIRE firefighter happened to be driving by just after the incident occurred and stopped dto render immediate care,” CAL FIRE Battalion Chief Nick Schuler reported. Firefighters extricated the woman, who was trapped in the upside-down car. Five engine companies, a rescue unit, paramedics, a helicopter and two battalion chiefs responded in support of the incident.