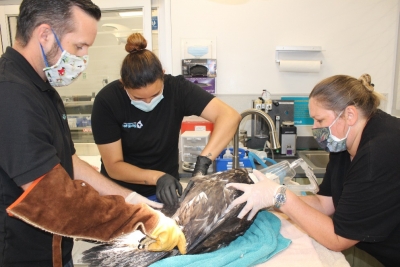 By Miriam Raftery
July 9, 2020 (Alpine) – An Bald Eagle rescued in Alpine has passed away, despite valiant efforts by the San Diego Humane Society’s Project Wildlife to save the ailing bird brought to their facility on the Fourth of July.
The fledgling eagle was found dehydrated on the ground at Camp Barrett and rescued by SoCal Parrot, which brought the eagle to Project Wildlife. It received intravenous fluids, oxygen, treatment for mite and diagnostic testing; results are still pending.
Monday the young bird was able to stand and accepted hand feeding from volunteers, but still needed oxygen.
So staff members sedated and anesthetized the Bald Eagle for a thorough exam.But Nina Thompson, interim director of marketing and communications for the San Diego Humane Society reports, “This morning the juvenile bird was having more difficulty breathing, despite receiving supplemental oxygen in the critical care unit at our Pilar & Chuck Bahde Wildlife Center." Thompson continues, "Our highly trained medical staff knew they had to find out why the bird was not able to breathe.”
According to Thompson, full body x-rays showed no obvious abnormalities. SeaWorld provided an endoscope to help visualize the inside of the eagle’s trachea and GI tract. There were some small parasites in the bird’s throat but not likely to be the major issue. There was also evidence of slow gut movement in the GI tract.
Once the diagnostic procedures were finished, the gas anesthesia was turned off but the bird never woke up from the anesthesia. Several efforts were made to resuscitate the Bald Eagle, but they were unsuccessful.
The loss is a major disappointment to environmentalists, since there are only a handful of Bald Eagles in our region. According to local wildlife photographer Debbie Merrill there are currently only two known active Bald Eagle nests in San Diego County.