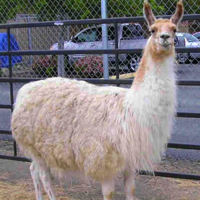 Animal Services Looking For “A Few Good Homes”
April 7, 2012 (San Diego County) -- The starving animals rescued from a Campo ranch by County of San Diego Animal Services last December are now ready to be placed into new homes. The livestock includes 10 sheep, 5 goats, 6 cattle, 11 llamas, and 6 horses. Most of the animals may be viewed at the County Shelter in Bonita at 5821 Sweetwater Road, 91902. Four sheep are being housed at the County Shelter in Carlsbad at 2481 Palomar Airport Road, 92011 and can be viewed there.

“These animals have been through a traumatic event, they were neglected and starved for a significant time,” said Animal Services Deputy Director John Carlson. “Our veterinary staff examined and treated the animals and they’re now ready for new homes but they will need some tender loving care.”
The goats and sheep are available for adoption now on a first-come, first-served basis. Animal Services will accept adoption applications for the horses, cattle and llamas through April 11. The horse applications will be used for those animals and they can be obtained at the three County Animal Shelters. The application should be accompanied by a completed sealed bid form . Only after screening applicants, will those qualified bids be opened. Winning applicants should be notified by April 13.
For more information, contact the Department of Animal Services at (619) 767-2625 or visit the website at www.sddac.com.