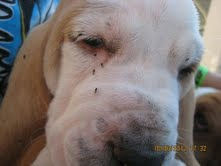 June 12, 2012 (Jacumba)–Residents of this rural town are “cautiously” optimistic after receiving written confirmation from the San Diego Department of Environmental Health [DEH] that Bornt Farms will soon cease operations in Jacumba. The reason given by the farmer is “water supply constraints” according to DEH.
But the eye gnat plague has worsened as Bornt has halted mitigation efforts—so residents’ woes are not yet over. Bornt’s withdrawal always raises questions about the future of his land—and who will be the townspeople’s new neighbor.

There is no word yet on future plans for the land, which is leased. With two major solar farms planned in Jacumba and with the owner of the De Anza resort recently purchasing most lots in downtown Jacumba with plans for economic revitalization of the town, the withdrawal of the Bornt farm adjacent to downtown and the community center opens a realm of new possibilities for Jacumba’s future.

Chris Conlan, Supervising Vector Ecologist with the County, has confirmed to ECM that Bornt is leaving due to water issues. In May, Jacumba residents observed that the farmer was no longer filling or maintaining the eye gnat bait traps and had let the protective buffer crops go dry. They also reported seeing Bornt Farm workers dismantling the eye gnat barrier fence that shielded the community amid rumors that Alan Bornt, owner of the farm, planned to cease operations in Jacumba once the last crops were harvested.
Meanwhile,” eye gnat populations in Jacumba continue to escalate,” a press release issued by Jacumba Against Gnats (JAG) states. The release adds, “Residents are frequently unable to garden or spend time outdoors.”
ECM contacted Bornt to request comment, but he has not responded.
Bonnie Halfdell, Jacumba resident, is especially bothered by the recent increase of eye gnats. This is because her bassett hound, Bella, recently gave birth to seven puppies. According to Halfdell, “Bella is struggling trying to avoid the eye gnats and protect her puppies. We have to keep a fan on them constantly or the gnats are in the puppies’ eyes, nose, and mouth and on mommy’s breasts, interfering with her nursing.”
On June 4, Bill Pape, founder of JAG, wrote Jack Miller, Director Department of Environmental Health asking DEH for a plan to ensure that Bornt Farms and the actual property owners, Jacumba Valley Ranch, stop the current eye gnat nuisance and eradicate the incubating larvae upon Bornt’s exit. Pape stated that it was the county’s ‘duty’ to do so and that action now would ultimately save the county money. 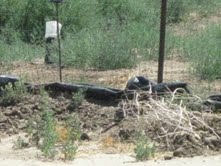 Bill Dennett, Principal at Clover Flat and Jacumba Schools also wrote to Miller. In his email he noted, “The eye gnat situation at the school has recently increased greatly, especially on non-windy days. Also, as I mentioned at the Board of Supervisors meeting earlier this year, the student population at Jacumba School will be increasing by about 50% for the 2012/13 school year. The children and general public of Jacumba deserve relief, and we hope you will take advantage of the opportunity of Alan Bornt's departure to enforce action on the property owners.”
The County’s response to these requests was gratifying, JAG reports. The DEH, in a June 7 response handled by Rebecca Lafreniere, DEH Chief of Community Health Division, stated: “DEH has received verbal notification from Mr. Bornt that he is going to stop farming in Jacumba. DEH has asked Mr. Bornt to provide an exit plan describing how he will control eye gnat emergency and migration when active farming operations cease.”
In addition, the letter stated, “DEH has asked Mr. Bornt to restore and maintain the Best Management Practices identified in the Bornt Farms 2012 Eye Gnat Nuisance Prevention Plan until exit plan measures are in place. Additionally, the Office of County Counsel has notified the property owner of its responsibility for any public nuisance that could develop upon closure of the farm.”
The DEH sent a strongly worded letter that same day to Bornt and copied Jacumba Valley Ranch. The letter was an official Notice of Inadequacy of Eye gnat Abatement and Notice of Requirement to Abate Eye Gnats Upon Termination of Farming. The letter outlined Bornt’s non-compliance, the steps the county expected Bornt or the property owner to take to fix the problem, and the County asked for an exit plan by June 15. The letter will be posted on the Vector Control Program Eye Gnat webpage Tuesday, June 12, 2012. 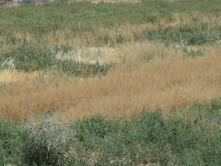 “It’s not over till it’s over,” states Pape. “We remain concerned about the farmer’s compliance. Mr. Bornt has recently abandoned even a pretense of maintaining the 2012 Abatement Plan he signed with the County. His contempt for the County and the Jacumba community, plus his indifference to the harm his eye gnats cause the children is obvious. Bornt Farms’ and Jacumba Valley Ranch's callousness also underscores the need for an Eye Gnat Ordinance that gives the County the ‘hammer’ it needs to protect other communities such as ours. “
Howard Cook, Jacumba Sponsor Group member, concurs that the eye gnat problem is not over yet.
“We know that eye gnat larvae can live under ground for up to six months,” he said. “Bornt needs to take steps to kill the larvae he has propagated prior to his exiting Jacumba. If he does not, we could potentially see millions of new eye gnats emerging if we get our usual July rains.”
Cook continued, “However, I am very pleased that our nightmare may be coming to an end. Hopefully the wetlands that used to exist north of the farm along Carrizo Creek will come back along with the wildlife it supported. Property values will improve, the new school year will be better for students as they play outside, our pets will thrive, and tourism opportunities will flourish.”
Jacumba residents are still urged to report eye gnat issues to the County’s toll-free hotline.
Asked whether the County intends to pursue adoption of a vector control ordinance for eye gnats now that Bornt is ceasing operations in Jacumba, or whether other means will be found to  control eye gnats at an Escondido farm where some residents have also raised complaints, Conland replied, “We’re going to have to wait and see—each farm is unique and we will have to deal with each individually.”